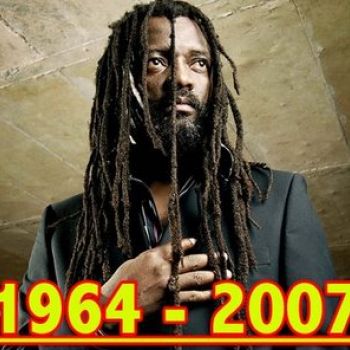 Lucky Dube – philosopher, poet, messenger, entertainer, and lyricist – holds a position of singular eminence in the world of reggae. He secured a place among the truly great of the world. Dube craved for philosophical distinction and visionary power, force and pride, which make the thinker a terror and a power in the land, and which so sever a great poet from the commoner throng that even kings are glad to do him honour. “There comes a time in every man’s life when he’s got to face the truth no matter what,” so sang Dube in his extant lyric, Rasta man’s Prayer; just as there comes a time when a great man must be placed above the daily workings of his creation. For Lucky Dube, the time is now. Gifted and genial, Dube was a musician of great skill who grew up from the roots of unshakeable faith in Africa, but never was found to be fanatical. It was the artist in him who saw and expounded the philosophy of unity (togetherness), peace, freedom, justice, respect, truth and the dignity of man – the echoes of which found expression in his timeless lyrics, and the message of which transcends people, colour and creed. Though he believed that all mankind are brothers, Dube lost faith in the possibility of uniting them: “I don’t know why I keep believing that one day they (the politicians) will unite us together when they’ve shown in more ways than one that all they care about is the dollar,” so muses Dube in his Guns and Roses. For him, the politicians will only divide the people for their own gains instead of uniting them. And so, four or five years of power is enough to “destroy a lifetime of togetherness”. His detestation of the political class was given emphasis. In his political anthem, Peace, Perfect Peace, he once again made a frantic effort to nerve humanity to stand up for Truth and warned against following politicians. Lucky Dube avowed that the object of his philosophy is to unite mankind and help humanity to find their right paths in creation. His long journey in the musical world was an excursion in humanitarian altruism. Seldom have ideas that influenced nations come from a low personage. For him, the world is divided into thin lines of colours: “white, black, coloured, Indian,” yet united in that all are an image of God. In the preamble to Together as One, he nerved himself Biblically: “When you read the Bible about the creation of the earth, the Bible tells us that man was created in the image of God. But it did not tell us whether God was white, black, coloured, Indian or whatever. When I see a white man, I see an image of God, I see a black man, I see an image of God ….” The margins of his philosophy never found expression outside his Bible knowledge. His lyrics as a synthesis of his philosophy offer us the mind of a Rasta man living at ease which is a shrewd perception of the life that we live, but also the world as it could be. Thus, the power of his lyrics resides with the truth of our lives. Lucky Dube is about bringing people together:  Back to my Root unveils his Rastafarian conviction, Together as One and Different Colours One People are his visions of world unity, with Guns and Roses dimming the hope of its actualization. If Reggae Strong affirms the immutability of truth, Stand Alone recollects the victory of truth. If War and Crime is an indictment of all human prejudices on colour and race, No Truth in the World is a scathing comment on the decay of human values. If Victims convicts man of his self-inflicted agonies, Perfect Peace is a rousing victory song for all to unite against the great enemy of mankind: the politician.   https://www.youtube.com/watch?v=KXMNniHxZTk In Reap What You Sow, Dube confirms the inviolability of the Laws of Nature. Man has always blamed fate and talked of injustice merely because he suffered, not realizing that what he considered unjust was but the equitable measuring forth of that Eternal Law which is carried out with as mathematical exactitude as the setting of the sun. False Prophet and Puppet master close it all: the mental agonies of a wilfully degraded life are worse tortures than are contained in the priestly notions of hell. Lucky Dube had re-created himself. His mind was deep and unreservedly enthusiastic. It was his fervent love of nature that offered him the gift of first class inspiration in his career, thus harnessing the wonders of the world before him. Thus was the source of Dube’s genius, directing his endeavours not to anything romantic or hyper-natural but to natural characters and phenomena. While his work lasted, Dube sustained the flow from his mind lyrics of inspiration governed yet ever fresh, which made him a classic among his contemporaries. The ardours of undisguised poetic volition and the flashes of vigour that illuminated his first album Rastas Never Die (1984) was sustained till his last, Respect (2006). On 18th October 2007, the Reggae world lost its king; Rastafarianism and Justice lost their greatest hero. Dube left a legacy of essence and wrote an enduring chapter in human freedom. The truth of his message should never be forgotten so that humanity may stand aright. He found the most entertaining way of expressing his thought-provoking emotions. In keeping with his towering legacies, we shall always “remember him”. In the joys of human interactions, we shall always evoke him. Lucky Philip Dube is not dead; he can never die. He will always live the ideas he had promoted and in our hearts who loved and cherished him – Irie. Isiani writes from Port Harcourt. *Source Naija 247]]>