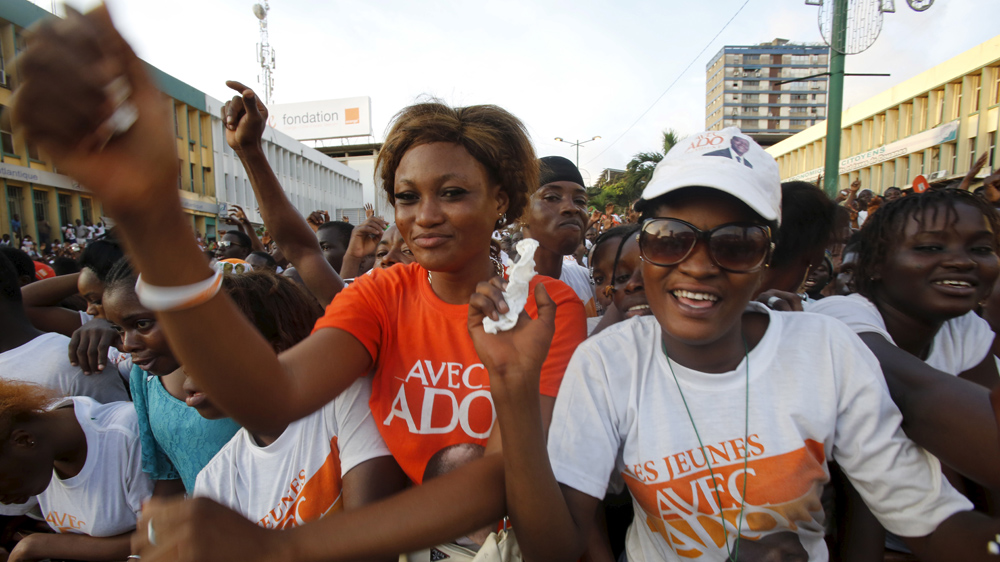 Abidjan, Ivory Coast – Schools re-opened a month ago but many pupils at the Saguidiba high school in Yopougon, Abidjan’s largest neighbourhood, have yet to return.

Their parents are waiting for the result of Sunday’s presidential election to decide whether to enrol their children in a school located in a sensitive area.

Yopougon is a stronghold of former president Laurent Gbagbo, whose refusal to accept defeat in the 2010 election triggered a five-month spate of violence that left more than 3,000 dead.

The Saguidiba high school was the last headquarters of Ggagbo’s militia in Abidjan, the economic capital of Ivory Coast. Bullet holes are still visible on the outside walls.

Parents have reason for concern. In early September, tyres were lit ablaze in front of the school’s entrance as part of a protest against incumbent President Alassane Ouattara. A bus was also set on fire in the same neighbourhood.

“Since the 2010-11 conflict, mistrust and ethnic-fuelled grudges characterise the relationships in and out of work,” teacher Traore Fousseny, 31, told Al Jazeera.

“Among colleagues we avoid talking about politics. On the maquis [street restaurant area] the people dine only with those belonging to their own ethnic group. It wasn’t like that before,” Fousseny said.

The issue of ethnic divisions began dominating Ivorian political life in the early 1990s, when then-president Henri Bedie embraced the concept of “Ivoirite” – “Ivoiryness” – officially aiming to favour the native population over migrants.

Critics say, however, Bedie’s real goal was the exclusion from the political arena of his rival Ouattara, a northerner with Burkinabe origins.

From that time until 2010, national debate focussed on the politically fabricated cleavages of Ivorians versus foreigners and north versus south, in a country renowned for favouring migration from all over West Africa.

Ivoirite has been abandoned since Ouattara won the 2010 election and Gbagbo was brought to the International Criminal Court in The Hague, where he awaits trial for crimes against humanity.

Critics of President Ouattara, however, accuse him of discrimination in the form of what’s described by some here as “ethnic readjustment” – or the largely disproportional appointment of northerners into public sector jobs at the expense of other ethnic groups.

The pro-Ouattara neighbourhood of Abobo is one of the most populated and unsafe in Abidjan. It has been labelled “Bagdad” because of its harsh living conditions. The battle for Abidjan started here.

Coulibaly Abdoulaye, 46, hails from Abobo. He owns a TV repair shop and works for the local non-governmental organisation ESD, which is focused on social cohesion projects.

Like most inhabitants of the area, Abdoulaye belongs to the Dioula ethnic group, the same as Ouattara. He said he doesn’t know people who have benefitted from so-called ethnic readjustment but acknowledged it exists.

“The minority are left with little power, many feel excluded and do not take part in social life,” said Abdoulaye.

Aboubakar Diosso is head of the Japanese International Cooperation Agency and works on social projects in Yopougon and Abobo.

“After two decades of ethnic polarisation, the process of reconciliation won’t happen overnight,” Diosso told Al Jazeera. “But for now, the main source of social grievance has to do more with unemployment than with ethnic-based claims.”

That seems to be the case of former militiaman Yaya, 46, who asked that his full name not be published for fear of reprisals. Also from Abobo, he was part of Ouattara’s security forces during the first civil war, which started in 2002, until the end of post-election fighting in 2011.

“My main problem now is that I have been unemployed since the war finished. The army promised to hire me, but it is not happening,” said Yaya.

Despite 10 years as a soldier, he said that hasn’t prevented him from having friends belonging to all ethnic groups. “The ex-combatants like me don’t want any more war,” Yaya said.

London-based rights group Amnesty International has highlighted unfair judicial treatment and the violation of human rights of presumed Gbagbo supporters since the end of the conflict.

Earlier this month, Human Rights Watch also criticised the government for the arrest and unlawful detention of opposition activists during recent demonstrations.

According to Maratou Koume, head of the government’s National Programme for Social Cohesion (NPSC), the situation has significantly improved since the last election.

“Before we didn’t even talk of social cohesion, now this term is on everybody’s mouth. Plus two-thirds of the refugees have come back to the country. If the country wasn’t safe, they would not do it,” Maratou told Al Jazeera.

The NPSC was established in 2012 with the aim of promoting national reconciliation and managing a compensation programme for war victims.

Maratou said the topic of ethnic readjustment requires “some proper research in the public administration to verify if there is really such a thing”.

Bouaki Kouadio is a sociology professor from the University Felix Houphouet Boigny in Abidjan. He said divisions still exist, but the situation has improved.

“There is no leader calling explicitly on a concept of exclusion, as was the case with Ivoirite,” Kouadio said. “Moreover the crisis has made the people very cautious of identity manipulation, and this has really reduced the tension.

“But what we have now is not social cohesion, it’s rather a pacification based on economic recovery – and on the disappearance of the opposition following Ggabo’s arrest.”