Over 2,000 African delegates are in India this week for the third annual summit between India and China. What’s on the agenda? By Maddy Crowell* 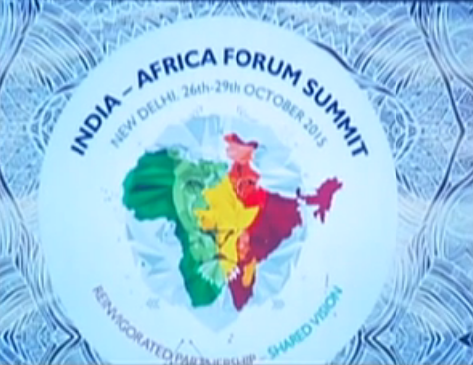 In recent years, India has made strenuous efforts to amplify its presence in Africa. Since Indiaopened its markets to all least developed countries in 2008 and Indian-African trade now totals roughly $7.8 billion a year.

But the numbers don’t come anywhere close to those racked up by China: In the past four years, China has doubled its trade with Africa to nearly $222 billion in 2014, importing 1.3 million barrels of crude oil a day in from Angola, Equatorial Guinea, Nigeria, Sudan, and the Republic of the Congo.

The Indian government, however, is working hard to distinguish itself from its Chinese neighbors. When asked by African journalists whether India was trying to compete with China, Indian Prime Minister Narendra Modi shrugged off the question.

“This is a relationship that is beyond strategic considerations. It is a relationship with a strong emotional link. It has been forged by our intersecting history; our centuries-old ties of kinship, commerce and culture; our common struggle against colonialism; our quest for equality, dignity and justice among all people; and, our shared aspirations for our progress and a voice in the world,” Mr. Modi said, adding, “Our relationship with Africa is unique and does not need any point of reference.”

In recent years, India has crafted a new image in Africa. India has built solar panel plants in Mozambique, increased trade in Ghana, helped Cameroon fight off the Boko Haram, and built highways and sugar plantations in Ethiopia.

In addition, India is a major exporter of pharmaceuticals and motor vehicles to African countries, and imports a significant amount of crude oil, coal, gold and gemstones from Africa. But this year’s summit includes a new line of requests from African countries: managing livestock in South Sudan, reconstructing an island destroyed by a volcanic eruption in Cape Verde, and more help in controlling Boko Haram’s presence in Cameroon.

India isn’t the only country with an eye on China’s presence in Africa: President Obama has also made attempts to encourage stronger trade relations between the US and Africa. In April this year, China surpassed the United States as a trading partner. In a four-day visit to Ethiopia last April, President Obama offered the US as an alternative trading partner – while taking some digs at the ways in which China has forged its own bonds with the continent. “Economic relationships can’t simply be about building countries’ infrastructure with foreign labor or extracting Africa’s natural resources,” Mr. Obama said. “Real economic partnerships have to be a good deal for Africa. They have to create jobs and capacity for Africans.” Whether this year’s summit will do much to change China’s growing presence in Africa is unlikely, but it’s a step in a new direction for India and Africa. As Modi reminded, Africa and India are bonded by something China can’t touch: a colonial legacy.

“Africa does not need any lessons from us. The colonial legacy left a long and deep impact on all of us. Africa, too, has passed through difficult times. However, Africa is making impressive progress now,” Modi said, later adding, “India has emerged as a major investor from the developing world in Africa, surpassing even China.”