When Guineans go to the polls on Sunday, will President Alpha Condé be able to secure a second term in office? 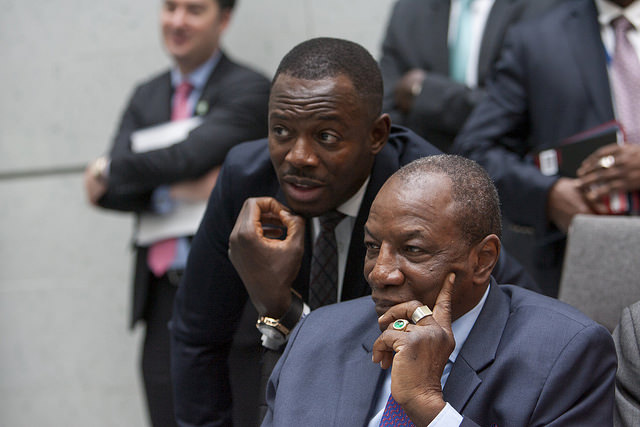 President Alpha Condé has been in power since 2010. Photograph by Simone D. McCourtie /World Bank.

In May, Guinean shoppers got their hands on a new banknote. The brand new 20,000 Franc ($2.75) denomination comes in a pretty blue and showcases the face of an anonymous Guinean woman on the front.

It is a useful denomination to have, but it also a clever piece of electoral campaigning ahead of the highly contested presidential elections scheduled on 10 October 2015. On its rear side, the note depicts the Kaléta dam, the key achievement of President Alpha Condé’s first term.

No matter that the dam’s first turbine only went online after the note went into circulation, and no matter that it was only officially inaugurated on 28 September, barely two weeks before the upcoming vote. Guineans were reminded constantly over the past few months of what Condé’s administration, which has been in power since 2010, claims as its signature victory.

The opposition has predictably called foul over the president’s creative campaigning methods. And the new banknote is not the only point of contention that Condé’s main rival, Cellou Dalein Diallo, and other opposition politicians have raised. After the presidential elections in 2010 and parliamentary elections in 2013, the vote on Sunday will be Guinea’s third attempt at free and fair elections. But questions about the process and its outcome remain.

Are the elections going to take place?

Elections in Guinea don’t have a great track record when it comes to punctuality. Both the 2010 and the 2013 vote only took place after numerous postponements, and the country hasn’t had local elections since 2000.

The opposition, especially Cellou Dalein Diallo and his party, the Union of Democratic Forces of Guinea (UFDG), feel they were cheated out of their victory in 2010 and see themselves at a disadvantage this time around yet again, citing in particular the government’s alleged control over the electoral commission (CENI) and its influence on the composition of local councils, which are responsible for the conduct of the elections and vote counting.

While ruling out a boycott, all seven candidates opposing Condé have petitioned CENI to postpone the polls for one week to address some of their complaints. So far the government, which has called the allegations “dishonest”, has refused these demands and it looks like the elections will take place this Sunday.

According to Kamissa Camara, Senior Programme Officer for West and Central Africa at the National Endowment for Democracy, a delay would not make much difference anyway. “Even if they postpone the elections it will not do anything,” he says “One week is not going to make up for the five years that the opposition wasted on complaining about what Condé did or didn’t do.”

Vincent Foucher, Guinea expert of the International Crisis Group, argues that Diallo’s key challenge, then as now, is that he is “still very much perceived as the leader of the Peul community, not the leader of the opposition”.

The Peul, also known as Fula, make up about 40% of Guinea’s population and are widely perceived as to dominate the country’s economy. Although the ethnic card does not figure as prominent in the election campaign as in 2010, ethnic affiliation is still the most important consideration for many voters.

The problem for Diallo is that while he can count on the fierce loyalty of his long time supporters, he has little to offer to the wider electorate. Instead of trying to make a case for his candidacy , the UFDG has largely restricted itself to blaming the government for perceived electoral fraud and the inability to bring the country, one of the world’s poorest, forward.

“Diallo is like a sprinter who ran his personal record in 2010,” says Kamissa Camara. “He won’t be able to beat his result this year.”

While not widely successful in any sense, Condé can point to some achievements in his presidency, including providing the capital Conakry reliably with electricity from the Kaléta dam. As the almost non-existent infrastructure of the county is one of the main concerns of the electorate, this gives him a huge boost. And although Condé’s handling of the Ebola crisis was widely regarded as rather incompetent, Guinea’s overall score in the Human Development Index has remained virtually unchanged despite the crisis.

In the Afrobarometer poll of 2013, more than 50% of the population approved of the president’s leadership, a value that was confirmed in a more recent poll in March 2015. These are not great numbers for Condé, to be sure. But they should be good enough.

“The general mood is that Condé is going to win,” says Foucher. Improved service delivery may result in a greater share of the vote for Condé in Conakry, while the fact that many more voters have registered in Condé’s stronghold than last time also gives his chances a boost.

The government is attributing this latter trend to normal demographic processes, but predictably, the opposition sees things differently, seeing it as a proof of the CENI’s partiality.

The opposition is not be wrong to be concerned. Both Camara and Foucher agree that Condé and his supporters are likely to leverage their influence over the government apparatus to ensure their champion’s victory should the result hang in the balance.

Will the opposition accept the outcome and what are the consequences?

In the past, Diallo and his supporters have reliably disputed every single election result. And there is no doubt that the opposition will again claim fraud after this Sunday’s vote.

But just like in the past, this will change nothing, though it may result in the loss of life and property.

“The elections will be a remake of the 2013 elections,” predicts Camara. “Diallo will call the youths and ask them to go onto the streets.” Especially in the Futa Djallon region and parts of Conakry, the UFDG’s strongholds, this would likely lead to confrontations with the security services.

But the opposition doesn’t have the strength to seriously challenge the government’s control over the country. According to Foucher, the security services have improved their training and equipment substantially in recent years and have been able to handle recent protests effectively.

Furthermore, while Guinea’s history is rife with coups, Condé has shrewdly appointed allies to the commands of key units and deployed soldiers and heavy weaponry away from the capital, severely mitigating the threat of an alliance between parts of the armed forces and the opposition.

What will the future hold?

Overall, nothing much will change for Guinea. With Condé heading for a second term, he is unlikely to drastically change his approach. Renegotiating some of the country’s mining deals and attracting major foreign investments in the sector will remain his greatest priorities, along with improving some of the country’s destitute infrastructure. One can only hope that he will be more successful in his attempts the second time around.

Beaten again, the opposition will have to regroup though they may be keeping an eye already on the next elections, most notably the next presidential contest in 2020, when Condé is barred from running because of constitutional term limits.

*Source African Arguments.Peter Dörrie is a freelance journalist focussing on security and resource politics in Africa. You can follow him on twitter at @peterdoerrie.
Katrin Dörrie is a development aid professional and an expert for politics in West Africa. She tweets at @katrinmeder.