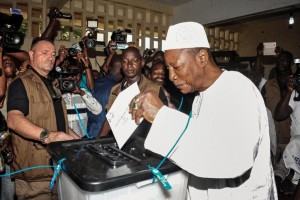 Guinea’s President and presidential candidate Alpha Conde casts his ballot at a polling station in Conakry on October 11, 2015 (AFP Photo/Cellou Binani)[/caption] Conakry (AFP) – Guinean leader Alpha Conde was re-elected to a second term in the first round of the country’s disputed presidential polls, according to provisional results released on Friday.

Results published by the Independent National Electoral Commission, from areas representing over 90 per cent of the electoral roll, showed Conde winning an outright majority with nearly 2.2 million votes.

Turnout in the October 11 election, which his main rival Cellou Dalein Diallo has denounced as a “masquerade”, was put at around 66 percent, well below an initial estimate of 75 percent.

One suburb of the capital Conakry and the overseas votes cast by Guineans living in New York have yet to be counted.

The opposition has said that Sunday’s vote, only the second democratic presidential poll since Guinea gained independence from France in 1958, was marred by widespread fraud and mismanagement, and demanded a re-run.

Conde, 77, had gone into the campaign promising to deliver a “KO blow” to his seven opponents by winning victory at the first round, avoiding a run-off against his closest rival. Guinea’s first ever democratic election in 2010 went to a second round between him and former prime minister Diallo, which Conde narrowly won. While Diallo grudgingly conceded defeat in that election he has vowed not to recognise the result of Sunday’s rematch — in which he garnered more than 1.06 million votes, according to the latest results — alleging widespread fraud. The 63-year-old and the six other opposition candidates all demanded a re-run and warned a proclamation of victory for the incumbent at the first round would vindicate their suspicions of vote-rigging. Diallo dubbed the vote “a masquerade, a massive fraud” and called for protests when he pulled out of the race on Wednesday.

The election has raised tensions in the west African country, with around a dozen people killed in clashes between Conde and Diallo supporters ahead of polling day.

An EU election observer team criticised the electoral commission for poor organisation and a “lack of preparation”.