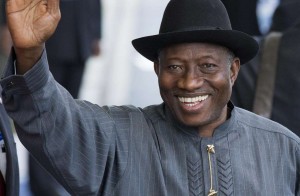 SINCE his ouster from power via the March 28 presidential election, President Goodluck Jonathan has maintained a rather low profile. He has minded his business and has said little that could even been vaguely interpreted as political. This should not be surprising for a man who must have been at the end of his tether by the time the results of the March polls were announced. Not only had he been trounced by his opponent but his party was more or less like a sinking ship that was being deserted by its inmates.

It was in such tatters that it’s yet to find its bearing six months since it was sent into the opposition corner of Nigerian politics. But in spite of the travails of the Peoples Democratic Party, not least the in-fighting that has brought it to the brink of disintegration, Jonathan has so far maintained the stance of a bystander.

He has been content to watch from the sideline as his erstwhile supporters in the PDP fight one another dirty over control of the carcass that their party has since become.

Some of these remnant warlords in the PDP who still pretend to be keeping faith with the party are alleged to have set Jonathan’s re-election ambition on the rocks by their pilfering of campaign funds and barely concealed backstabbing antics. Now they’ve succeeded in showing themselves for the common thieves that they are by making it relatively easy to push both Jonathan and their discredited party out of power, they are with one hand trying to hold together at the seams the torn garments of their party, while using the other hand to battle their opponents both within and outside the PDP.

Even as this drama unfolds, Jonathan has yet said nothing. It is easy to imagine him contemplating from the detached remove of his political sabbatical the unending treachery of the same people who propped him up as the candidate to beat even when they knew he was already a stale presidential product.

The scales must have fallen from Jonathan’s eyes immediately the results of the March presidential polls came in. He must have realised he had been defeated in spite of the intimidating war chest of both local and foreign currencies he had set up among party stalwarts to ensure his return to Abuja. But rather than allowing himself to be further taken for a ride by contesting the result of the election as the likes of Godsday Orubebe would have wanted, Jonathan took the honourable path of conceding defeat and thereafter got down to the task of ensuring a smooth handover of power, not minding the contrary advice of both family and party members. Jonathan looked truly tired and worn after the election. He did well to take what he himself described as a deserved vacation during which he stayed far from politics.

He was rarely seen in public and had virtually no word for the press, not even when some of his ardent supporters were being shown to have bankrupted the national treasury under his watch. He has only just started making his comeback to the public space and not even the damning verdict of his self-confessed number one supporter and adoptive political father, Chief Edwin Clark, that he watched while corruption took on a life of its own under his administration- not even this denial by his own ‘father’ would chafe him. Silence has since been the word from his end. But when he finally chose to make his entry, it was in deliberately measured steps. What better way to do this than by announcing the establishment of his foundation, coming along with his selection as the head of a Commonwealth monitoring group to the Tanzanian elections that tool place four days ago? By‘re-launching’ himself in this manner Jonathan is taking his destiny in his own hand. He must henceforth determine for himself and by his own effort what would be his legacy after serving as president.

Had Jonathan chosen to contest the outcome of the last presidential election, not many Nigerians would have thought it odd. He would only be following the beaten path of Nigerian politicians. He would not have been short of supporters either, including his political father who now considers him too soft on corruption.

The odd thing he did was not to have travelled down the winding path of the electoral tribunal and called into question everything connected to the election. He disappointed many, if not all, of his ardent party and ethnic supporters on this score. He denied them the opportunity to further milk him dry while pretending to be fighting a patriotic cause.

But had Jonathan taken the advice of those who wanted him to reject the result of the election, his name would by now be anathema outside Nigeria and in many parts of the country. It would have led to a calamity of unimaginable proportion, throwing the entire country into chaos.

It was evidently in recognition of his ‘sacrifice’ that he was appointed to lead the Commonwealth observer group to the Tanzanian election.  He has taken that role seriously and has rightly warned the Tanzanians to learn from his experience in the Nigerian election. An incumbent that could relinquish power is the perfect ambassador against African sit-tight syndrome. He would be less amenable to condone electoral fraud and more likely to urge acceptance on a defeated candidate particularly an incumbent bent on retaining power. Goodluck Jonathan sure earned the recognition that befits his acceptance of defeat in the March election.

This one ‘dividend’ of his democratic posture is well deserved and should not be denied him. If we would have condemned him had he chosen to reject the result of the last election, we ought also to commend and celebrate him for the positive outcome of the choice he made not to reject the result.

His estranged godfather, Olusegun Obasanjo who was head of the ECOWAS observer group that monitored the Ivorian presidential election that held same day as the Tanzanian election, did no more than Jonathan (that is ensured a free and peaceful transition of power) before he became the celebrated leader that is today feted around the world.

Obasanjo built his international profile and launched his career as a writer on this singular act. He was, thereafter, well on his way to becoming an international statesman with more international clout today than any other Nigerian leader living and, arguably, dead. President Goodluck Jonathan could also begin the gradual process of ensuring a positive legacy for himself even after the massive corruption that marked the end of his administration. He might serve Nigeria and the world better in retirement than when in power. Now is his time to become a statesman.