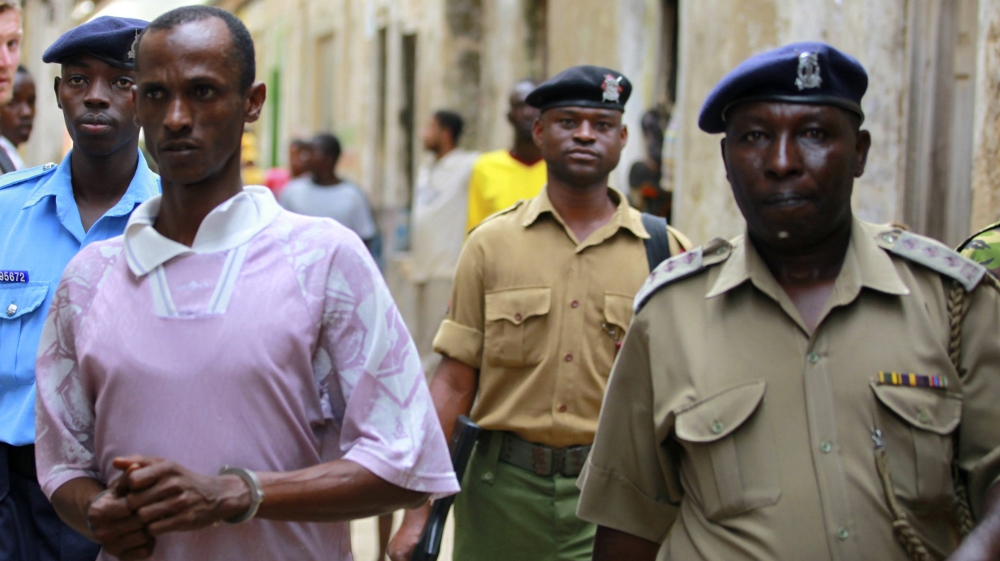 A secret MI6 document obtained by Al Jazeera’s Investigative Unit raises serious questions about the British government’s actions before and after the kidnapping of Judith Tebbutt and the killing of her husband, David.

The couple was seized on September 11, 2011, during a brazen assault on a Kenyan luxury resort in Lamu, near the Somali border.

The intelligence briefing suggests British spies had specific information about a threat to British travellers, something the Foreign Office failed to communicate to the public.

It also indicates that the only man tried in connection with the kidnapping may be innocent, adding to a growing body of information that suggests the conviction is wrong.

The MI6 document shows British spies pointed to al-Shabab fighters as the likely hostage-takers, stating: “Shabab commander Kahale Famau Kahale is believed to have been involved in the murder of David Tebbutt and kidnap of Judith Tebbutt.”

“Khale has previously expressed a desire to kidnap Westerners from Lamu”, the document also stated, adding that he “was reportedly located in Ras Kamboni near the Kenyan-Somali border” in the days leading up to the attack.

No one from the Somali armed group was ever arrested or charged in the case. The British government imposed a travel ban on tourists in the aftermath, which has caused severe economic damages for East African resort owners. The UK also pressed Kenyan authorities to bring the attackers to justice.

In 2013, the Kenyan government convicted and sentenced a solitary figure in the case, Ali Babitu Kololo. The 35-year-old Kenyan villager and father of two was sentenced to death by hanging for his alleged role.

The trial was widely criticised as a sham, including by UK-based rights organisation Reprieve. The case relied on a single piece of circumstantial evidence linking him to the crime – along with a confession obtained under torture.

Kenyan police detained Kololo a day after the attack while he was walking in the area. The evidence against him was the alleged existence of a shoe print, said to be Kololo’s, in the sand near the crime scene.

One of the camp’s guards claimed to have seen the print, despite the fact that one of the officers who detained Kololo stated that he was barefoot. The other did not mention Kololo’s footwear. Neither British nor Kenyan police have provided photographs.

A briefing of the case on the Reprieve website notes that Kololo has all along maintained his innocence and that following his arrest, Kenyan “officers squeezed and twisted his genitals, leaving him with urinary incontinence”.

Al Jazeera’s Investigative Unit has closely chronicled the illegal activities of Kenya’s security forces , including a number of kidnappings and extra-judicial killings.

Judith Tebbutt spent six months in al-Shabab captivity. She only learned of her husband’s death by phone while she was still being held. She later testified that Kololo was “not among the men who entered the bungalow, shot her husband, and then abducted her”.

Kololo has been sentenced to death by hanging and is being held in a Mombasa jail pending appeal.

He is a member of the Boni tribe, a minority group long marginalised by the Kenyan government. According to Reprieve, Kololo is “effectively illiterate”, with “little formal education” and, until his arrest, had scraped a living as a local woodcutter and honey gatherer.

Despite this, he had no lawyer or interpreter throughout his trial and was, therefore, unable to meaningfully participate in the legal proceedings.

Reprieve notes that it was only under duress that Kololo confessed to “leading the [Somali] pirates to the camp”, and that he immediately recanted his confession afterwards, maintaining his innocence.

Reprieve has also taken aim at British police, who provided the assistance of Detective Superintendent Neil Hibberd. The rights group notes the Metropolitan Police claimed to have provided all the evidence they collected, including “that which may confirm Ali [Kololo’s] innocence to the Kenyan prosecution. But the UK government continues to refuse to provide this, or any other information, to Ali [Kololo] or his lawyers.”

The Metropolitan Police’s involvement in the trial is controversial, if not illegal, according to Reprieve, because it contributes to the imposition of a death sentence following an unfair trial and the use of torture. The death sentence is illegal under UK law, and Reprieve claims the Metropolitan Police had “breached obligations of the Human Rights Act of 1998″ by its “actions in support of his prosecution”.

The Metropolitan Police, which takes the lead in investigating kidnap and hostage situations involving UK citizens abroad, contacted Al Jazeera three times about the leaked document ahead of publication. They later failed to respond to calls from solicitors representing the network.

The four-page MI6 kidnap assessment, dated September 13, 2011 – just two days after the attack – was provided to Al Jazeera as part of the Spy Cables project .

“The financial pressure is likely to have been a driving factor behind any kidnap plans,” MI6 wrote. “We judge that the Shabab are likely to seek ransom payments for Judith Tebbutt.”

The intelligence file adds, “The Shabab do not have a cohesive plan for dealing with hostages. This makes it difficult to predict how the Shabab will deal with Judith Tebbutt. We assess that she is likely to be in Somalia, and the Shabab are likely to seek ransom payments.”

After her release and a reported ransom payment of $1.1m, British Prime Minister David Cameron denounced such cash handovers.

The MI6 assessment was passed to the South African State Security Agency (SSA) along with a warning:

“THE BRITISH SECRET INTELLIGENCE SERVICE MUST BE REFERRED TO BEFORE ANY ACTION IS TAKEN ON THIS INFORMATION. THE INFORMATION IN THIS TELEGRAM MUST NOT BE DISCLOSED TO INDIVIDUALS CONCERNED.”

Judith Tebbutt, who has written a book about her ordeal, declined numerous approaches by Al Jazeera to speak on the subject.

One subheading of the MI6 briefing is, “Previous Threats to Kiwayu Safari Village [KSV]”. It raises questions about whether the British Foreign Office had information about a specific threat and failed to warn the Britons of the danger.

MI6 wrote that there had been several incidents before the kidnapping, beginning with the arrest of four al-Shabab fighters near the hotel in November 2008.

The country threat level for Kenya was severe, meaning attacks were highly likely. “We judge that there is a high risk to Westerners of kidnap/attack by various Somali militia groups,” MI6 wrote. “The risk extends to Westerners in the Shabab’s operating area in Kenya near the Somali border.”

It is not clear whether this was escalated in the days after the Tebbutt hostage crisis or before.

MI6 also writes that from intelligence reporting in March 2011 – just months before the Tebbutts were attacked – al-Shabab’s Kahale “had expressed an interest in stealing a dhow that could transport kidnapped Western tourists to Ras Kamboni in one-and-a-half hours, rather than taking a whole day”.

After al-Shabab shot and killed David Tebbutt, his wife Judith was spirited away by boat to Somalia in the manner described.

British spies also wrote that “intelligence from 2010 specifically indicated Kahale’s desire to kidnap Western women at the KSV, believing that they would grow weak in captivity and thus expedite the payment of a ransom”.

Another journalistic reporting on Judith Tebbutt’s captivity indicates she was indeed “malnourished by an unvarying diet of goat meat and plain spaghetti” until her March 2012 release.

It appears there had been an advisory against all but essential travel up to 48km from the Kenya/Somali border. The KSV resort is an estimated 63km from the border – just 14km beyond the travel zone.