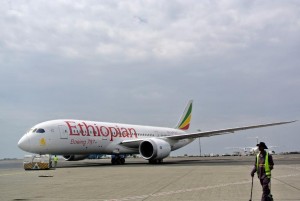 Addis Ababa (AFP) – Africa’s flourishing Ethiopian Airlines is clear — the future lies in Asia and it plans to hit that point home by putting Chinese crew members on all flights to China as of next month.

“Asia and particularly China is our focus. This is our biggest market,” CEO Tewolde Gebremariam told AFP.

Now the airline is training Chinese crews for its China-bound flights, because “90 percent of passengers flying to China don’t speak English”. “They don’t understand the safety instructions,” Gebremariam said, adding that they needed teams that speak their language and “understand their culture”. Some 30 young Chinese recruits are completing their training at the Ethiopian Airlines aviation academy. “I chose Ethiopian Airlines because I want an international experience,” said He Xupeng, who left a Chinese company back home to join the African air carrier. China has invested heavily in major construction projects in Africa, one of the latest being sub-Saharan Africa’s first modern tramway, a $475-million scheme largely funded by China’s Exim bank that opened last month in the Ethiopian capital. Beijing sees Africa as a key source of natural resources and raw materials and even built the $200 million African Union headquarters in Addis Ababa in 2012 as a gift expressing “friendship to the African people”. Because of China’s ever-expanding investments across the continent, the Chinese community has grown steadily in Africa, as has the market for flights to and from Asia. – Junction of Africa and Asia – At the Ethiopian Airlines training centre, Africa’s sole centre to boast a Boeing 787 simulator, there are pilots, technicians and flight crew of 49 nationalities. The country has come a long way from the global headlines generated by Ethiopia’s 1984 famine, experiencing near-double-digit economic growth and huge infrastructure investment that have made it one of Africa’s top-performing economies and a magnet for foreign investment. Ethiopian now boasts the largest fleet in Africa, with 77 aircraft. It has grown rapidly, acquiring 32 new planes since 2010. With six million passengers in 2014, it aims to surpass other major African airlines such as EgyptAir and South African Airways — which count seven million passengers. Gebremariam said he wants to make Ethiopian Airlines the primary carrier between Africa and Asia. “We’re the best point of entry for the continent,” Gebremariam said. “Addis is situated at the junction point between the emerging economies of Africa and Asia.”

In addition to its 91 international destinations, the company hopes to add Jakarta and Ho Chi Minh City in the next year. It also wants Yaounde on its list of destinations in Africa.

“The market is unbalanced. We want to change that.”