Prime Minister Hailemariam Desalegn has started his second term and the country is embarking on the next phase of its grand development plan. Has anything changed? 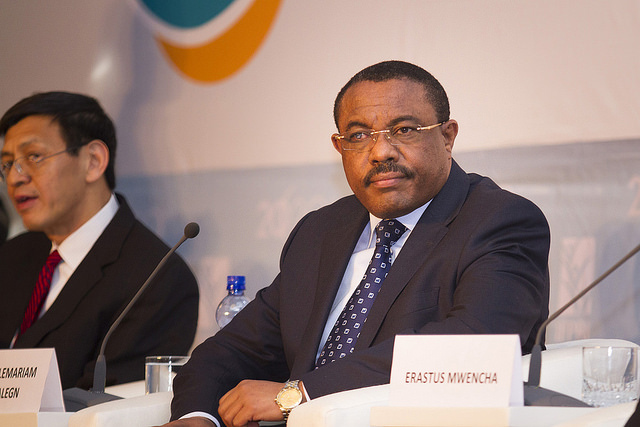 Prime Minister Hailemariam Dessalegn has now begun his second term in office. Photograph by IFPRI -IMAGES.[/caption] At the start of this month, Hailemariam Desalegn was re-elected as Ethiopia’s Prime Minister. Earlier in May, the ruling EPRDF had achieved a landslide victory in questionable elections, winning every single parliamentary seat. The party’s members voted unanimously for PM Hailemariam to serve a second term to continue the work he’s been doing since 2012. Hailemariam’s first move was to re-shuffle his cabinet, though 16 of 31 ministers retained their posts. There were no huge shocks in his appointments, though a few changes raised some eyebrows. Perhaps the most surprising change was the replacement of EPRDF veteran Sufian Ahmed who has served the Finance Ministry for the past 20 years. Rumours abounded, with some suggesting health complications were responsible, while others wondered if Ahmed was replaced so a figure more open to privatisation and market liberalisation could replace him. Another notable change to the cabinet was the removal of Kebede Chane as Minister of Trade, reportedly over his failure to achieve export targets outlined in the country’s Growth & Transformation Plan. Chane was appointed an advisor to the PM and replaced by his former deputy Yacob Yala. The selection of Getachew Reda as Director General of Communications with Ministerial Portfolio also caught the eye of some. Reda was formerly an aide to the PM and has now been promoted three times in three years. Of the new ministerial appointments, only one woman – Aisha Mohammed Mussa – was given a cabinet post. Along with the minor cabinet reshuffle, Hailemariam also enacted some restructuring. Three important ministries – Agriculture; Urban Development, Housing & Construction; and Women, Children & Youth Affairs – were split into six more specified roles. Meanwhile, an entirely new Ministry of Public Enterprise was created to oversee publicly-owned businesses. A new plan As well as a new cabinet, the newly re-elected Ethiopian government is also enacting phase two of its ambitious Growth and Transformation Plan (GTP II). Coming into action in 2011, GTP I was a five-year plan developed by the government with the intention of strengthening the country’s agricultural sector, developing natural resources and improving infrastructure. The details of GTP II are yet to be unveiled, but the government hopes to increase economic growth from 7% to 11% per year over the next 5 years. It also seems the government will pursue a more economically liberal direction than previous governments, moving further away from the Marxist-Leninist approach once propounded by former PM Meles Zenawi. With the adoption of an Economic Partnership Agreement (EPA) with the EU, for example, Ethiopia is set to liberalise 80% of its trade volume over a 15-year period, once the deal is ratified – Ethiopia may, however, exempt certain sectors from immediate liberalisation. Additionally, discussing planned changes earlier this year, Yohannes Ayalew, Chief Economist of National Bank of Ethiopia, outlined how the government intends to continue privatising publicly-owned enterprises. Overseen by the Privatisation & Public Enterprises Supervising Agency (PPESA), the government intends to privatise high-profile assets such as the National Alcohol & Liquor Factory, though judging by the agency’s performance in GTP I, the government may need to do more to attract buyers and reduce the debt held by state companies if it is to meet its targets. Another key pillar of GTP II is to increase Ethiopia’s manufacturing potential and achieve lower middle income status by 2025. The government intends for manufacturing to account for 25% of export revenue, while it hopes to bring down a dependence on agriculture, which currently accounts for 80% of exports. Manufacturing currently contributes 16% of GDP, while agriculture contributes 40%. The government wants to reduce agriculture to 36% of GDP over the next 5 years. The government has big ambitions under GTP II, but what remains unclear is how exactly it plans to reshape its economy and, in particular, how it will attempt to further industrialise, especially given its responsibilities to liberalise under the EPA. This may be a tricky balancing act given that no country has managed to industrialise without the ability to impose tariffs on foreign trade and protect national industries from external competition. Foreign friends With regards to Ethiopia’s foreign relations, there do not appear to be signs of a  change in direction. The Horn of Africa nation is a key Western partner in the so-called War on Terror and this seems set to continue. Both General David Rodriguez, Commander of the US’ AFRICOM, and Sarah Mcintosh, the UK Foreign Office’s Director General of Defence and Intelligence, visited Ethiopia thismonth. Meanwhile, EU Ambassador to Ethiopia Chantal Hebberecht recently confirmedEthiopia would receive €745m ($845m) – the European Development Fund’s highest allocation – over the next five years in a package intended to stimulate EU-Ethiopian development cooperation. Ethiopia’s partnerships with Western powers play a large part in it getting access to aid, though the approach is not without its critics within and outside the country. Many accuse Ethiopia of using its generous military assistance packages to clamp down on internal opposition, and the muted response from Western partners when the ruling EPRDF won 100% of seats in the recent elections spoke volumes. The relationship is clearly of benefit to the governments involved, but the effects on citizens are often less clear. Despite having a new cabinet and new economic plan in place, Ethiopia looks set to continue on the path it has been treading in recent years – one of impressive economic growth, intolerance for weak internal opposition, and close security ties with the West. This mix has allowed the ruling party to maintain close control over the country, a pattern which doesn’t look likely to change any time soon. Fadil Elobeid is currently based in Addis Ababa. He is a master’s student at the Institut d’études politiques de Paris and former Programme Officer at the Royal African Society. Full list of appointments: *Source African Arguments]]>