Karen Kaplan* DNA from a man who lived in Ethiopia about 4,500 years ago is prompting scientists to rethink the history of human migration in Africa. [caption id="attachment_21306" align="alignleft" width="300"] 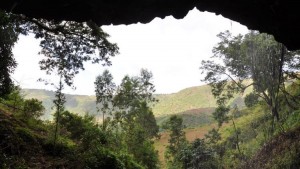 Mota cave in Ethiopia, where researchers found the body of a 4,500-year-old man whose DNA was still preserved.[/caption] Until now, the conventional wisdom had been that the first groups of modern humans left Africa roughly 70,000 years ago, stopping in the Middle East en route to Europe, Asia and beyond. Then about 3,000 years ago, a group of farmers from the Middle East and present-day Turkey came back to the Horn of Africa (probably bringing crops like wheat, barley and lentils with them). Population geneticists pieced this story together by comparing the DNA of distinct groups of people alive today. Since humans emerged in Africa, DNA from an ancient Africa could provide a valuable genetic baseline that would make it easier for scientists to track genome changes over time. Unfortunately, such DNA has been hard to come by. DNA isn’t built to last for thousands of years. The samples of ancient DNA that have been sequenced to date were extracted from bodies in Europe and Asia that were naturally refrigerated in cooler climates. That’s what makes the Ethiopian man so special. His body was found face-down in Mota cave, which is situated in the highlands in the southern part of the country. The cool, dry conditions in the cave preserved his DNA, and scientists extracted a sample from the petrous boneat the base of his skull. The resulting sequence is the first nuclear genome from an ancient African, according to a report published Thursday in the journal Science. Radiocarbon dating revealed that the bone was 4,500 years old. That meant Mota (as the researchers called him) lived before Eurasians returned to the African continent. Consistent with that timeline, Mota did not have any of the genetic variants for light-colored eyes or skin that evolved in the populations that left Africa. Nor did he have variants that arose in Eurasian farmers that allowed them to digest milk as adults. Mota did have three variants that are known to help modern-day Ethiopians live in high altitudes. (The present-day town of Mota lies more than 8,100 feet above sea level.) When the researchers compared Mota’s genome to those of contemporary humans, the closest match was with the Ari people of southern Ethiopia. With this information, the research team was able to investigate the mysterious group of Eurasians that came to Africa 3,000 years ago. They created a model that assumed the Ari genome was a mixture of DNA from Mota and an unknown population from west Eurasia. Then they “plugged in” DNA from several candidate populations to see if they could get a combination that looked like Ari DNA. Two results stood out from the rest. One was for modern-day Sardinians, who are known to be the closest living relatives to the earliest farmers. The other was for members of the so-called LBK culture in Germany, early farmers who lived about 7,000 years ago. If the Eurasian settlers who arrived in Africa 3,000 years ago were indeed descendants of the LBK farmers, then the story of their migration through Africa needs to be revised, the researchers wrote. By comparing the LBK genome with DNA from Africans alive today, the scientists calculated that these ancient farmers may have made up 25% or more of the population in the Horn of Africa during the migration years. All of those migrants ultimately pushed farther into Africa than previously thought, they determined. African populations from the western and southern tips of the continent got at least 5% of their DNA from these Eurasian migrants, according to the study. Some groups from Ethiopia, Somalia, Djibouti and Eritrea can trace more than 30% of their DNA to these migrants. “The ability to sequence ancient genomes has revolutionized our understanding of human evolution,” wrote the research team, which was led by Marcos Gallego Llorente of the University of Cambridge and Eppie Ruth Jones of Trinity College Dublin. They said they are eager to find “even older African genomes” that may make the story more complete. *Source LA Times. Twitter @LATkarenkaplan]]>