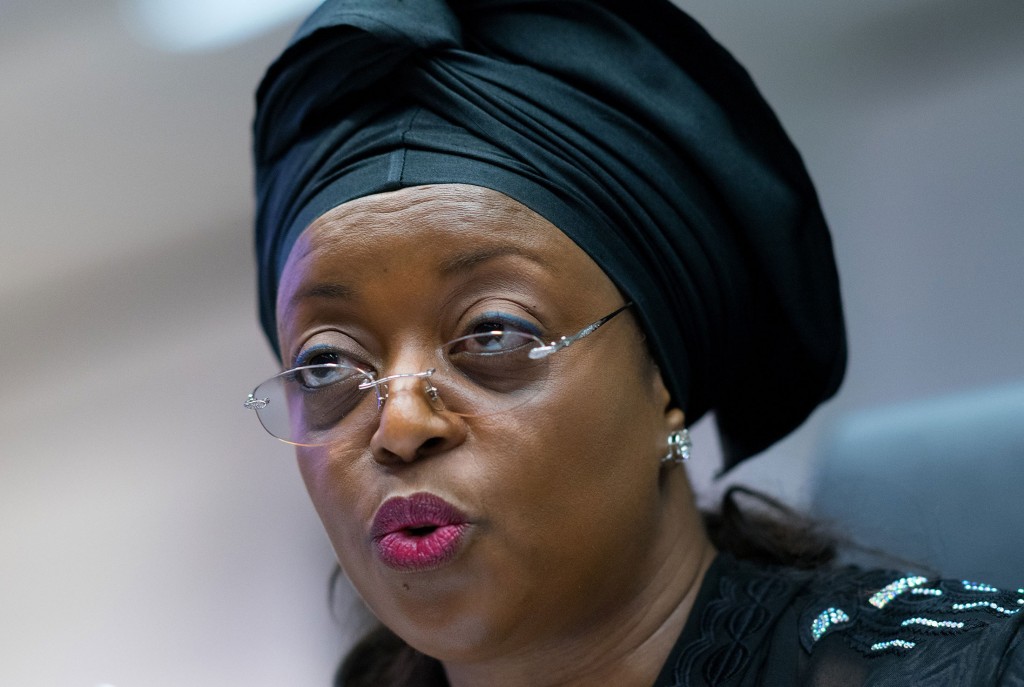 Diezani Alison-Madueke
Photographer: Joe Klamar/AFP via Getty Images[/caption] IMMEDIATE past  Petroleum Resources Minister, Mrs Diezani Alison-Madueke, who is battling with cancer in London and  being investigated by UK’s National Crime Agency (NCA) for alleged corruption, has asked Nigerians for a special favour. She wants Nigerians to pray for her as she undergoes cancer surgery next week. Speaking through Oscar Onwudiwe, her family’s lawyer, according to online newspaper, The Cable, Diezani, who denied reports of her arrest, said she was undergoing cancer treatment in the UK and “hopes to come out strong to face all the allegations.” In a statement, Onwudiwe said: “The Madueke family, like most other families, has its own challenges. For instance, Mrs. Diezani Alison-Madueke has been receiving treatment for cancer in the UK which started while she was in office. She completed months of chemotherapy just last week and she is scheduled to undergo surgery next week in London. The family has been bearing this challenge with prayers and as much grace and fortitude as possible; and would plead with all reasonable Nigerians to pray for her recovery so that she can face these allegations and give account of her stewardship.” The call for prayers came after an earlier statement released on Thursday in which the family revealed the state of the former minister. Onwudiwe had made the following statement: “The stories are false but it(sic) feeds  the mood of the moment; hence, the silence from Diezani all along. It is worth emphasising that Mrs Alison-Madueke was never arrested or detained and her passport was never seized. She was merely invited, and she honoured it promptly. But there is a limit to how much any reasonable person can bear the tactics of these … We all know that what makes a lie fly is the little truth contained therein. This happens to be the weapon used to defame highly-placed people.” Onwudiwe also accused the Nigerian media of reporting “laughable claims” of a purchase of an apartment in Hyde Park with an “amount which embarrassingly ranges from £12.5 million sterling to £13 billion sterling (N3.9tr). “This claim is utterly false and laughable, for the amounts mentioned are only in the imagination of the reporters. This property is quite popular. It belongs to a well-known eminently successful Nigerian entrepreneur who would also find this allegation embarrassing as the intention to sell the property has neither been contemplated nor disclosed to any person.” Mixed reaction greets Diezani’s prayer request Diezani’s request elicited mixed reactions from some Nigerians. While some said they would not pray, others said they would pray for the speedy recovery of the former minister to enable her face her graft trial. We will pray for her and all Nigerians – Ikokwu Second Republic Politician, Chief Guy Ikokwu, who has always called for the restructuring of the country and adoption of the parliamentary system of government to check corruption, urged Nigerians to pray for the former oil minister. ‘’We will pray for her and all other Nigerians,  both those who are ill and well so that God bestows His mercy on all for the right things to be done in the nation. Nigeria needs God’s mercy. God knows those who are guilty and those who are not guilty,’’ he said. We will pray she recovers and asks for God’s forgiveness – Sarah Jubril Former Presidential Candidate, Mrs Sarah Jubril said apart from quick recovery it is also good for Diezani to ask for God’s forgiveness if she is guilty of the graft allegations. Her words: ‘’Thank God she believes Nigerians have a forgiving heart. We will pray she recovers and ask God for forgiveness if the allegations against her are true. Thank God she is alive. I wish her quick recovery. It is good she has the humility to ask Nigerians for their prayers. We hope to see her in good health soon.’’ She doesn’t deserve our prayers – Gbagi However, former Minister of State for Education, Olorogun Kenneth Gbagi, disagreed and urged Nigerians not to pray for her. ‘’How can we pray for her when she put Nigeria into bankruptcy? Let her go and ask forgiveness from God.]]>