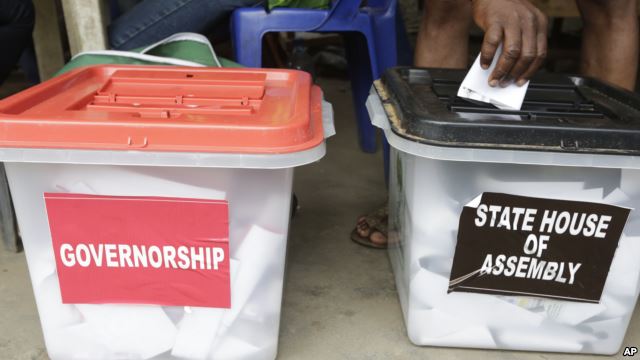 A man casts a ballot in Lagos, Nigeria, April 11, 2015.[/caption] In the next few months, African voters will go the polls in several countries, including Tanzania, Ivory Coast, Guinea and the Central African Republic. In many instances, it is not clear who is likely to win, even in countries where polls show the leadership to be unpopular. That’s because there are competing pressures between pro-democracy reformers and governments exercising new ways to maintain power. Often, long-established governments have retained the upper hand. The days of overt ballot box stuffing may be over, but Jennifer Cooke, the Africa director for the Center for Strategic and International Studies in Washington, said authoritarian regimes are now using subtle and even legalistic ways to defeat opponents. They include strict media regulations, broadly interpreted security laws, and a crackdown on pro-democracy NGOs that receive foreign funding. Some use the democratically elected legislature or courts to enact constitutional reforms to remove presidential term limits. When confronted with the declining popularity of its long-serving ruler, the ruling party in Angola introduced reforms to ensure that the president would no longer be elected by direct vote, but by the majority in parliament. Cooke said even in places like Tanzania, which she called “a donor darling,” there are troubling media laws, including those that allow police to seize computers without justification. There are also laws that forbid the publication of statistics that are not approved by the government.” Fighting back Pro-democracy groups have their own means of fighting back, including new technologies. Cooke said in 2008, Zimbabwe’s opposition was able to assert it had won elections with photos of the polling results; in Nigeria’s recent polls, social media were used to educate voters on their rights and responsibilities and to monitor the elections. In some regions, pro-democracy NGOs now work across borders, while urbanization and economic advances are creating a more assertive middle class that wants its say in politics. “[There are] rising expectations on the part of African citizens,” Cooke said. “[There are] demands and pressure for democracy from young, more urban populations. Economic growth and investment — even though it’s been uneven across the continent — has meant many of those at subsistence levels are now part of the consuming, if not middle, class that are able to exert more political pressure and have more time to do that.” Democracy activists say civil society, African regional groups like the Economic Community of West African States, and the international community need to push back against authoritarian rule. Cooke said Western policymakers should question the long-term stability of their alliances with undemocratic governments. Activists say support during the Cold War for autocrats like Zaire’s Mobutu Sese Seko and apartheid South Africa harmed the reputation of the U.S. among ordinary Africans. “And in places like Rwanda and Ethiopia [that are experiencing growth],” said Cooke, “there will be a limit unless they can open up the economy with thinking that encourages entrepreneurialism.” Training future leaders Activists note that many national governments in Africa are ceding power to other levels of government, thus requiring greater transparency by, and monitoring of, state and local politics. They say such decentralization offers an opportunity for young people to get involved in local politics before one day engaging on the national level. The support of future political leadership and entrepreneurship is a key part of the Obama administration’s Young African Leaders Initiative, YALI. Chris Fomunyoh of the National Democratic Institute in Washington called for continued support for democratic reforms by Congress and the president. “When [President Barack Obama] speaks in Ghana and says, ‘Africa doesn’t need strong men, it needs strong institutions,’  young African youth believe him and in his investment in the YALI program,” he said. “What we are looking for is confirmation of that kind of [pro-democracy] stance. “So, way in advance,”  he continued, “when we have the sense that some of these leaders are looking for ways to tinker with their constitutions, there can be that friendly but very frank conversation that says, ‘You’re hurting your people and the world is not going to allow you to get away with it.’ ” Continued US support Activists say U.S. lawmakers should ensure adequate funding for election activities. Fomunyoh said that for the first time, money has been earmarked in Congress for democracy programs in Africa. The EU is also providing substantial support for civil society in Ethiopia and other countries. Together, NGOs and the international community can work with the African Union and other bodies to set continentwide norms for credible elections. And that should help guarantee that upcoming polls fulfill their promise of political and economic development — not just in theory, but in practice. *Source VOA]]>