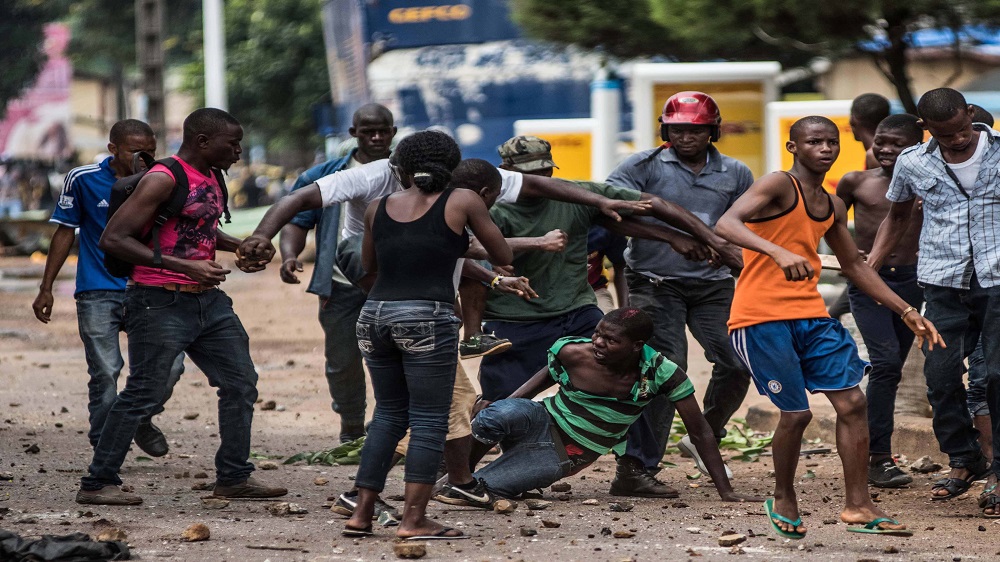 Conakry, Guinea – After two days of deadly clashes, Guineans will vote on Sunday in their country’s second presidential election since the end of military dictatorship in 2009.

The vote is seen as a key test of the impoverished West African nation’s transition to democracy following decades of strongman rule.

Pitched battles broke out on Thursday and continued throughout Friday after President Alpha Conde refused an opposition demand to postpone the election, which critics say is rigged heavily in his favour.

Conde is widely tipped to win a second term in office, beating his main challenger Cellou Dalein Diallo and six other presidential hopefuls. But opposition parties have announced they will not accept the results while alleging widespread voting irregularities.

Youths from both sides of the political divide hurled rocks at each other in several parts of the capital Conakry leaving two dead and many wounded, according to police. Another five people were killed elsewhere in the country on Thursday.

In Conakry’s market neighbourhood of Madina, rioters looted shops and set fire to property as police and soldiers fired tear gas to disperse the rampaging crowd.

Elsewhere, young people armed with clubs and knives chanted “Allahu Akbar” – God is great – as they barricaded roads in the opposition stronghold of Bambeto.

In the upmarket neighbourhood of Dixinn, mobs roamed the streets attacking those suspected of being in favour of the wrong party.

“He is supporting the government,” one opposition protester told Al Jazeera as a man was led away bleeding heavily from the head.

“This is democracy,” shouted another before launching a rock at yellow-shirted supporters of President Conde.

Violence and democratic participation in Guinea have occurred before. Conflict has accompanied every vote the country has had since its troubled return to civilian rule, including legislative elections in 2013, which saw dozens of people killed.

With political affiliation largely following ethnic lines, electoral contests have tended to pit the ethnic Peuhl – who form the country’s largest group and mostly align themselves with the opposition Union of Democratic Forces of Guinea (UFDG) – against the Malinke, who are for the most part loyal Conde and his Rally for the Guinean People party (RPG).

Despite comprising about 40 percent of the population, Guinea has never had a president from the Peuhl ethnic group, and many say they feel excluded from the political process.

“Even the gendarmes [police] are against us,” said Amedou Bah, who told Al Jazeera his shop in Madina had been burned down in Friday’s violence. “They [Conde’s supporters] destroyed it just because I am a Peuhl. The gendarmes are bandits, they support the ruling party. Everything is against us.”

The sprawling Madina market, where both ethnic groups work and trade in close proximity, is a flashpoint for tensions and both communities have suffered tit-for-tat attacks.

On Saturday the situation appeared to have calmed down, although tensions remained high with opposition parties claiming the electoral commission was biased towards Conde – and that the vote had already been rigged.

Among other grievances the opposition says minors have been issued with voter cards in pro-Conde areas, and many areas in opposition strongholds are located too far from polling stations.

The imbalance is plain in the leafy streets of downtown Conakry, where yellow ribbons crisscross the streets and the president’s billboards far outnumber those of his opponents.

“Progress marches on,” read one, while others show a smiling Conde superimposed beside a recently opened Chinese-built hydroelectric dam.

Conde’s supporters say he deserves a second term on the back of advances in infrastructure and the decline of the deadly Ebola disease in the country. The new dam that has boosted the electricity supply in the capital is the jewel in the crown of his campaign.

His rivals see Ebola’s continuing presence almost two years after the outbreak as inexcusable, and point at the endemic poverty that grips much of the population.

Despite staggering mineral wealth – including rich reserves of bauxite and some of the world’s largest untapped deposits of iron ore – Guinea is among the 10 least-developed countries in the world, according to the United Nations. Nearly half the population lives on less than $1.25 a day.

Youth unemployment is endemic and many young voters who spoke to Al Jazeera cited the lack of jobs as their most immediate concern.

“Everyone you see around you is unemployed,” said 29-year-old Mohamaed Kake at a rally for Conde’s main rival Diallo on Thursday. “I graduated two years ago with a degree in engineering but still I have no job. There is no justice here.”

For some, however, the result of the election doesn’t matter.

Cowering under the shelter of his carpentry workshop in the Dixinn area on Friday as rocks thrown by protesters rained down on the flimsy corrugated-iron roof above, Abdulai Sillah said he just wants the vote to be over.