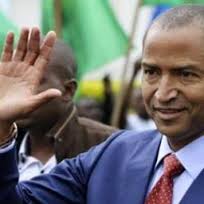 The Democratic Republic of Congo’s new opposition coalition may consider former Katanga Governor Moise Katumbi as its presidential candidate in elections set to take place next year, the former Planning Minister Olivier Kamitatu said. Seven political parties announced Oct. 10 they formed a coalition that Kamitatu said will compete in a series of votes scheduled to take place in Africa’s biggest copper-producing nation over the next 12 months. Kamitatu, one of the leaders of the so-called G7, said Katumbi shares many of the alliance’s political convictions as it seeks a single candidate to compete in the vote. “He has all the qualities, the strengths, the leadership needed to run the country,” Kamitatu said in a phone interview on Monday from Kinshasa, the capital. “He is not yet a candidate. The day he is one, we will discuss with Moise Katumbi.” Katumbi, 50, quit President Joseph Kabila’s People’s Party for Reconstruction and Democracy last month, signaling he may run for president. His resignation came after the leaders of the seven political parties were expelled from the ruling Presidential Majority in September after writing an open letter to Kabila in which they questioned his intention to stand down at the end of his second term in 2016. Members of the dissident parties, including Kamitatu, were then removed from government posts before forming the G7.

Kabila’s critics say the packed election program which envisages holding votes covering local governor to senatorial ballots over the next year is designed to fail and allow the 44-year-old leader to extend his presidency beyond a second term, which the constitution stipulates should be his final one. Kabila hasn’t said whether he’ll run, while government spokesman Lambert Mende said in February that Kabila “will end his mandate” next year. Congo is the world’s largest producer of cobalt, used to make rechargeable batteries. It’s also Africa’s biggest tin miner, and is a key source of minerals including gold and tantalum, which is used in smartphone and laptop batteries. In a joint statement on 10 Oct., the G7 also called on the government and the national electoral commission to publish an adjusted election schedule. A gubernatorial vote set for Oct. 6 has already been delayed. The seven parties in the alliance include the Movement for Social Renewal of the President’s former security adviser, Pierre Lumbi Okongo, and the Christian Democratic Party of the long-serving politician from Mbandaka José Endundo Bononge. The G7 plans to attract other groups to its coalition and says it has spoken with opposition leader Vital Kamerhe’s Union for a Congolese Nation and with members of parliament who remain within the Presidential Majority. “We have spoken with Vital Kamerhe and share many values with his UNC and with members of parliament who remain with the Presidential Majority,” he said. “We will be an important force at the next elections.” *Source Bloomberg]]>