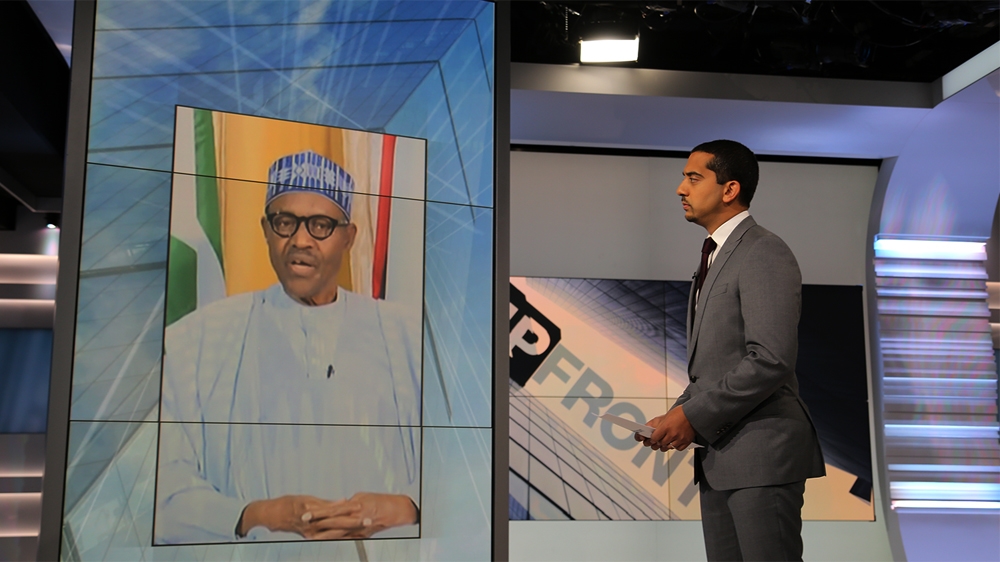 In this episode of UpFront, Mehdi Hasan speaks to Nigerian President Muhammadu Buhari about Boko Haram, alleged abuses by the Nigerian military and his leadership of the country.

Hasan also exposes three things you probably do not know about the history of the US gun debate, and asks a retired Saudi general if closer ties between Saudi Arabia and Israel betray the Palestinians.

“We are going to tackle [Boko Haram] head on… Nigerians will not regret that they have entrusted responsibility to us,” Nigerian President Muhammadu Buhari pledged when he took office in May.

Since then, however, the armed group has continued to attack villages in Nigeria, Cameroon and Chad, prompting the US to announce this week it will deploy troops to Cameroon to aid in the fight.

With a December deadline set by Buhari to stamp out the armed group, can the new leader deliver?

In this week’s Headliner, Hasan speaks to the Nigerian president about his pledge to defeat Boko Haram and his efforts to bring back the kidnapped Chibok girls.

The US is in a league of its own when it comes to the stats on guns, and many point to the US constitution to explain why keeping and bearing arms is a right in the country.

But the history behind the US constitution’s second amendment and the politics surrounding the gun control debate may surprise you. In this Reality Check, Hasan explores three little known facts when it comes to the politics of this debate.

The Arena: Why were Saudi Arabia and Israel in secret talks?

Is an alliance forming between Israel and Saudi Arabia?

An emerging relationship was on display in June when Anwar Eshki, a retired Saudi major general, appeared on a panel with Dore Gold, now the Director General of the Israeli Ministry of Foreign Affairs. The pair addressed their common opposition to Iran, and Eshki, a close adviser to the Saudi royal family, outlined his plan for the Middle East, which includes peace with Israel.

While the two countries have never had official diplomatic relations, do Eshki’s secret overtures represent the start of a new anti-Iran alliance? And are Palestinians being thrown under the bus in the process?

Editor’s note: The Arena was conducted prior to recent unrest in Israel and Palestine.