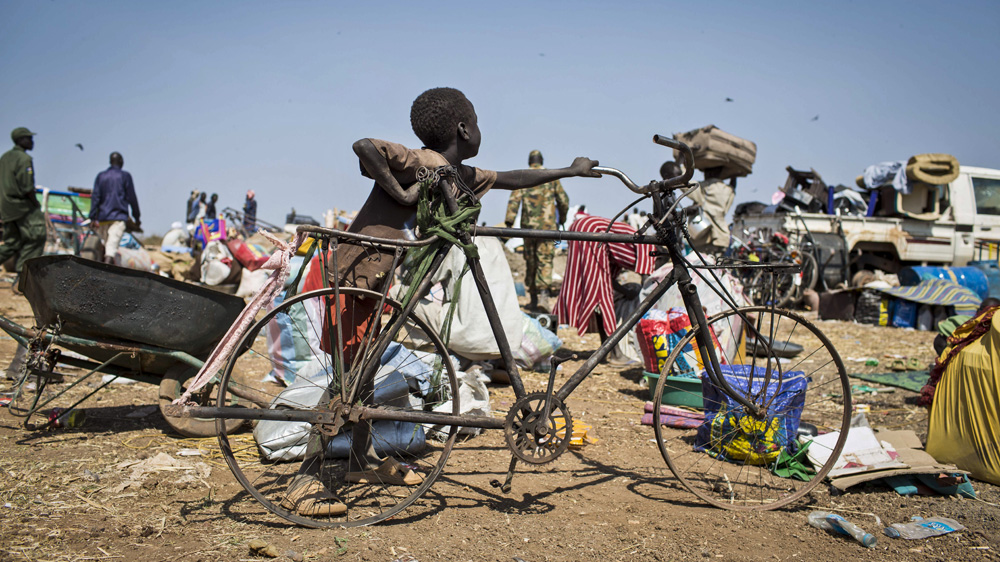 Bentiu, South Sudan – Whether it’s through breaks in the patchy razor-wired mud walls or out its gates, it is easy to leave the UN base here – but departing is often accompanied by death.

About 100 metres from the main gate of the United Nations Mission in the Republic of South Sudan (UNMISS), a tractor-digger clears space in a swamp for Simon to lay to rest the consecutive car-load of bodies collected by the Danish Refugee Council aid organisation, his employer.

“The relatives of the dead feel awful about the process, but there’s nothing that we can do. This is what the war has done,” said Simon, a former businessman.

He is seeking refuge at the UNMISS base along with 120,000 others. Everyone clamours for the employment provided by the international charities to help run this self-contained city – except for Simon’s job.

“Most of the people hired along with me absconded as they couldn’t bear seeing the bodies,” he said, mopping sweat from his brow as he stood in overalls in the mid-morning sun.

“I feel so bad because people are dying every day… It never stops,” he said in broken English, gesturing to what lies beneath the orange bog with clumps of long grass.

“Most of them is a baby: four years, two years, one years, and they die. I don’t know the diseases, but they die,” Simon said.

Two of the deaths happened right by the UN gate as little boys playing next to one of many peacekeeper-manned checkpoints unearthed a mortar that ripped through them.

Now, disease, hunger and exhaustion are slowly sending children to watery graves. Last year, children inside the camp were drowning because it was so flooded.

“Women would have to sleep upright holding babies,” said one medic.

Mothers still complain of flooded tent floors and a lack of torches to see the poisonous snakes slithering around them.

People inside the camp know this road from Bentiu, capital of Unity state, to the UN base as the final gauntlet to run to flee a civil war that has visited every village.

Armed men hiding in these grasslands take potshots at women and children who have become targets in an ethnic war in which even babies are considered partisan.

The Dutch aid group buried more than 600 people from the camp in the first eight months of this year.

Many of the elderly deceased are carried for hours through a war zone by children bound to fulfil their deathbed wishes of burying them back at home. Failing your parents could result in a curse that is worse than the war – or death itself.

“I’m taking a risk because of my very old mum, because if I stay here with my kids she might curse me,” said Nyilok, who had just ran back to the UN camp with her one-month-old baby after coming under fire.

“The UN is protecting us but what we take exception to is the two tins of sorghum that we are given that is not enough to sustain a person,” said Nyatuach, another mother.

In one week in September, the UN said 34 children died of acute malnutrition in Bentiu. Medics working for French charity Doctors Without Borders – known by the English acronym MSF – have been “watching severely anaemic children coming in, ghostly white and fitting” from malaria, which has spread like wildfire through the camp.

“Because of the second disaster that is disease, you just sit around sad with other mothers watching babies dying right there of sickness,” said Nyatuach.

Desperate to try and buy extra food for fading children and milk for shrivelling babies, women and girls often leave the safe confines of the camp to go and gather firewood in the bush.

The possible trade-off is rape, abduction, or death at the hands of armed men. “People go and they don’t come back,” said Nyilok.

Nyatuach recalled recently seeing her friends caught by “soldiers loitering in the bush” to rape or kill women.

“The stronger of us managed to run away. We didn’t see what happened to them but we heard the sound of people crying and I don’t know if they returned or not,” she said, letting loose a high-pitched scream to imitate their sounds.

She escaped by dropping her firewood quickly and running for her life. But she will go back for wood for the sake of an extra $1.20 a week – as without it she can’t feed her children on the food rations, nor her baby milk.

Health workers here question how long people trapped in the quandary of long-term safety over short-term survival can live on this limited diet of grains, and how it is affecting already war-weakened children.

At Bentiu airstrip, UN planes full of aid workers are met by 4×4 vehicles branded with international charity logos. But a convoy of men in military uniform in machine gun-mounted trucks also pulls up to unmarked planes carrying sacks of food.

The food situation for civilians outside the camp is dire, with people reporting attacks by armed men straight after distributions, and being forced to show where they’ve hidden or buried food on pain of death.

“Over the last month, it’s been increasingly hard to work outside” because of insecurity or threats of it, said Vanessa Cramond, MSF’s medical coordinator in Bentiu.

MSF, which has had staff members shot dead in Unity state, just pulled out of Leer county along with the International Committee of the Red Cross. Its shared facilities were raided twice in one weekend by “very organised armed men” who stole cars, medical supplies, and cash while threatening staff.

The UN’s Bentiu base is also still in the range of fire. “A lot of times, unfortunately, our team has had to stay in the bunker,” said Cramond.

The camp’s population has quadrupled, but the number of people dealing with it has stayed the same because of a lack of funding for South Sudan’s humanitarian crisis and the ongoing insecurity.

Aid workers are “limited by the number of people who can fit in the bunkers in case there’s fighting”, explained Simon Mansfield, who runs the European Union’s aid operation ECHO in South Sudan.

Soldiers have stood on the two-metre high walls threatening to shoot people they consider rebels, even though the camp is overwhelmingly packed with women and children.

A 20-year-old woman was killed from a round fired in one of many celebration volleys by whichever side was winning that week.

Lost or frustrated boys – some of whom used to band together in youth militias – have formed gangs inside the camp with names such as “Akon”, “50 Cent, and “Run Amok”.

Similar to the militias outside, they switch sides according to who can benefit them most, and fight with spears after UN police went home to home and confiscated firearms.

Some end up in “prison” – a stack of shipping containers guarded by UN police where camp criminals sweat it out. With nowhere else to go, they’re usually released back into the camp after a short stay.

“I can’t comprehend how it has come to this; people dying recklessly every day,” said Nyatuach. “This is a time of war and children are dying all the time, so the ones left are God-given”.

Back at the bog outside the UN camp’s gate, Simon the gravedigger keeps repeating the words: “small, small babies”.