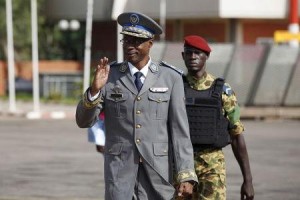 OUAGADOUGOU (Reuters) – The leader of a short-lived coup in Burkina Faso, General Gilbert Diendere, was handed over to authorities on Thursday after seeking refuge in the Vatican embassy, sources in the transitional government said on Thursday.

Diendere, a former spy chief, was at the head of a week-long power-grab by Burkina Faso’s powerful presidential guard last month, during which the interim president and prime minister were held hostage.

He had sought sanctuary in the embassy in the recent days after the transitional government – tasked with guiding Burkina Faso to elections this month – was returned to power amid international pressure and popular protests.

“He has been handed over to Burkinabe authorities,” said a judicial source close to the transitional government.

Earlier, Prime Minister Yacouba Isaac Zida had said the government had provided guarantees to the Vatican embassy that Diendere’s life would be respected if he was handed over. Zida said he would be handed to judicial authorities. Diendere said he had led the coup because of proposals to dismantle the elite presidential guard, the RSP, and to exclude allies of deposed president Blaise Compaore from running in this month’s scheduled presidential election. The putsch lasted a week and the government was restored last Wednesday. During its first post-coup cabinet meeting it formally disbanded the RSP and launched an inquiry into the military power-grab. The army’s chief of staff on Monday accused Diendere and Compaore’s former foreign minister Djibril Bassole of hindering attempts to disarm the elite unit and of seeking support from foreign forces and Islamist militants. Bassole was arrested at his home on Tuesday.

A spokesman for the Coordination of Azawad Movements (CMA), a grouping of five rebel movements including the MNLA, said Maiga was detained at the Ouagadougou airport as he prepared to fly to Bamako to sit on a committee monitoring a peace accord agreed earlier this year.