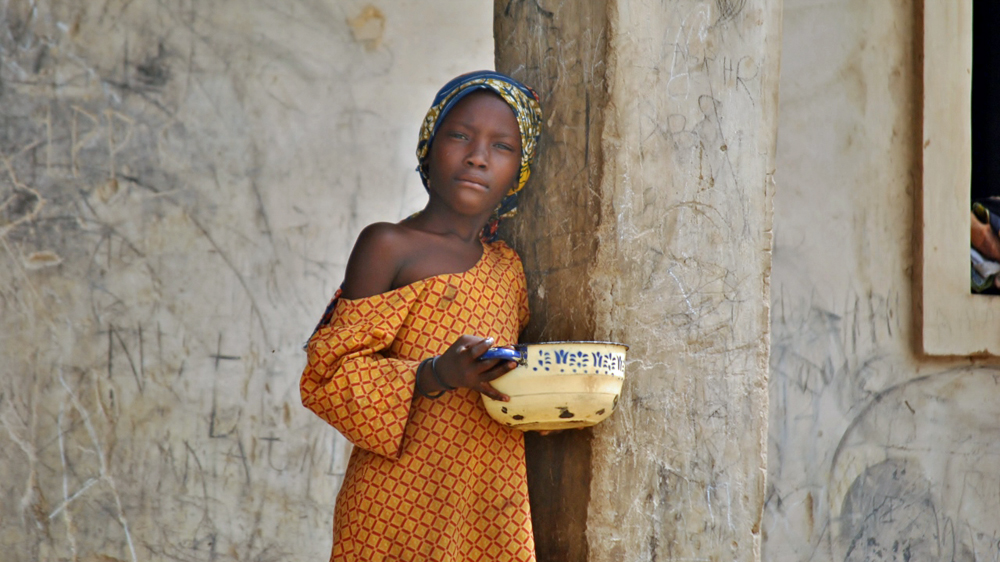 Maiduguri, Nigeria – Kabiru, a tall man in his late 20s, is exhausted. With a group of men, he has to prepare food for about 2,000 displaced Nigerians living in Gombyo camp.

Kabiru, who goes only by one name, pours water in a large pot of rice. His task is to ensure there’s enough firewood and water to keep the rice boiling. It’s hard work, especially under the searing sun in northeastern Nigeria.

More than two million people have been displaced in the region since 2009, when the armed Boko Haram group launched military operations to overthrow the government and create an Islamic state in the northeast.

Eighty percent of the displaced come from Borno state – the epicentre of the conflict. Many have sought refuge in Maiduguri, the state capital, living with friends and relatives, or renting overcrowded houses.

Others have fled to neighbouring Chad, Niger or Cameroon.

The influx of displaced people has overstretched the already limited housing capacity of host communities. Only eight percent live in camps for internally displaced people.

A cholera outbreak that struck in early September has killed 20 people so far and sickened 1,500 others in Gombyo camp outside Maiduguri. The spread of disease is exacerbated by poor sanitary conditions, as there are only 82 latrines for 8,000 people who live there.

In addition to the harsh difficult physical conditions, displaced Nigerians must also deal with emotional suffering.

Many were forced to flee unspeakable violence and persecution more than once. According to humanitarian agencies and government data, 64 percent of those escaping Boko Haram fighters have been displaced several times.

“The impact of insecurity on families forced to flee attacks on civilians and military offensives is immense,” said Kasper Engborg, head of the United Nations Office for Coordination of Humanitarian Affairs (OCHA) in Nigeria.

“Beyond the economic impact and growing vulnerability of families who risk being separated with each new displacement, the coping capacity of both displaced people and the host communities across northeast Nigeria is being exhausted at an alarming rate,” said Engborg.

Kabiru used to be a farmer, but after seeing Boko Haram fighters kill his brother in January, he fled for his life to neighbouring Chad, where he stayed for three months doing menial jobs to survive. When fighting came to Chad, Kabiru fled to Niger where again he started anew.

In May, following a Boko Haram attack on an islet in Lake Chad, Niger authorities deported 4,000 Nigerians, including Kabiru who was brought to Gombyo camp.

Kabiru’s case is not unique.

Aliyu Muhamad, 35, was fishing when Boko Haram attacked his town of Kukalor, killing his elderly father and two brothers. He managed to reunite with his wife and three children and they fled to Chad, where he established a small fishing business. But his ordeal was far from finished.

“They [Boko Haram] attacked us early in the morning. I was getting ready to go to my business when they came. I took my family and ran away. For the second time we lost everything; we left only with the clothes we had on.”

After fleeing from Chad, Aliyu spent three months in Niger, but he was deported back to Nigeria following an escalation of Boko Haram attacks in the region. He was brought to Gombyo camp where he is separated from his wife and children.

Camp policy forbids men and women from living under the same roof, even if they are married. This adds to the emotional distress of the displaced.

“Houses are given randomly to the people and – mainly for security reasons but also for the protection of the unmarried women – we keep the men separated from the women,” explained Sadiq Bashara, a camp official from the Borno State Emergency Management Agency.

Umar Sani, one of Gombyo camp’s managers, said there are plans to allow families to live together, but security remains the top priority.

“We still need to investigate many of the recent arrivals in the camp, as we suspect that Boko Haram informers might infiltrate the camp. We located five suspects among the IDPs [internally displaced people] just a week ago,” Sani said.

On the edge of Gombyo camp, a group of more than 50 women gathered outside their concrete house. They had all been kidnapped by Boko Haram, but managed to escape. They look wary and tired and seem to be distant from the other women in the camp.

Their children, some visibly malnourished, stare and greet visitors, but nobody comes closer.

RELATED: Girls who escaped Boko Haram refuse to be victims

Hajia Binta, 38 years old, nurses her newborn baby while attending to her older daughter. She is from a village near Konduga, a town 35 kilometres from Maiduguri. When Boko Haram attacked their community, most people fled. But the fighters set fire to buildings and in the ensuing panic, some women were trapped.

“We did not know where to run. They surrounded the village and when the fire broke I just ran back,” said Binta in a soft voice. “They circled us and ordered us to follow them.”

“The food was never enough and some days we had nothing to eat. We were begging them to give us more food. Every time they were coming, I could feel my knees trembling from fear,” said Aisha Mohamed, a 38-year-old mother of three.

The women spent five months there until the insurgents brought them to another location in the Sambisa forest. They had to farm and cook and also fetch water from the community wells at night. Fear, despair and submission kept them from trying to escape.

Eventually, a military raid targeted the Boko Haram hideout where the women were held and the fighters fled, leaving the women behind.

The Nigerian army brought them to Gombyo camp in August. Binta was pregnant when she arrived at Gombyo, and gave birth to a baby daughter in early October.

Boko Haram has been known to sexually abuse women in captivity. But the stigma against being a rape victim is strong here, and none of the women at Gombyo camp said they had been physically or sexually assaulted.

In collaboration with local and foreign agencies, the Nigerian government is providing the freed women and girls with counselling and medical care to help with their children – or their pregnancies.

“People are deeply traumatised of what they have gone through in the hands of Boko Haram,” said Musa Baba, a programme analyst in Borno for the United Nations Population Fund, which provides psychosocial support and mental health counselling to displaced people in the camps.

“If you talk to the women they will tell you they have heard about sexual violence. But if you ask them to whom that has happened they will not talk,” explained Baba.

Because of the stigma, Baba added: “People prefer to settle their cases individually and let the survivors to bear their burden. This is what we are working on to change.”