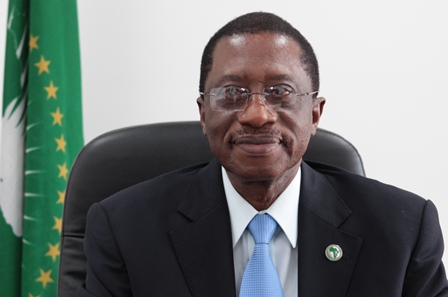 H.E Dr Mustapha S. Kaloko, Commissioner for Social Affairs AUC[/caption] Today H.E Dr Mustapha S. Kaloko, Commissioner for Social Affairs AUC, performed the flag hoisting ceremony to mark the Operationalization of the African Institute for Remittances (AIR) in Nairobi, Kenya. The ceremony was witnessed by a number of Senior Government Officials of the Republic of Kenya and representatives from the African Diplomatic Corp and International Organizations in Nairobi. In his address, the Commissioner emphasized the key role the AIR will be playing in helping African countries develop proactive policies aimed at leveraging remittances for social and economic development. H.E. Amb Ben Ogutu, Political and Diplomatic Secretary, Ministry of Foreign Affairs and International Trade, representing the Cabinet Secretary, reaffirmed the commitment of the Government of the Republic of Kenya to make available to the Institute the US$ 5 Million grant pledged by the government. Ambassador Abdoul Wahab Haidara, Ambassador of Senegal and Permanent Representative to UNEP & UN-Habitat in Nairobi, as well as the High Commissioner of Zambia H.E. Brenda Muntemba expressed their readiness to support the Institute. Others present included the Interim Executive Director of the African Institute for Remittances, Mr. Amadou Cisse, the Project Manager Mr. Abia Udoh and the Remittance Consultant Mr. Hailu Kinfe and many other government functionaries. It will be recalled that the African Institute for Remittances, an AU Specialized Technical Office, was officially launched in November 2014. *Source APO/AUC]]>