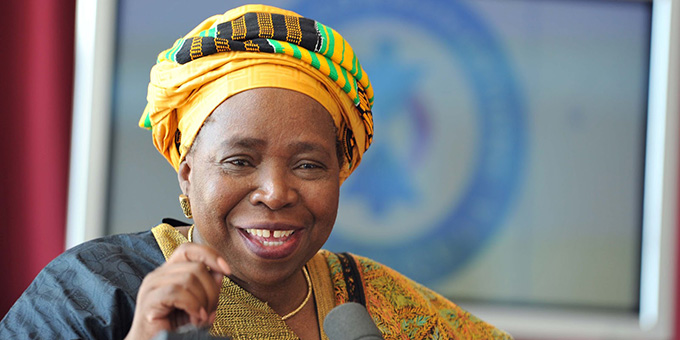 Nkosazana Clarice Dlamini-Zuma-1st Woman Chairperson of African Union Commission[/caption] The African Union Commission Chairperson, Dr Nkosazana Dlamini Zuma has announced that her winnings from the ANN7 South African of the Year (SATY) Award would be donated to the “Thusanani Foundation”, a youth-led education initiative based in Johannesburg, South Africa. The SATY 2015 Award to Dr. Dlamini Zuma came with an amount of Two Hundred and Fifty Thousands South African Rands, (ZAR 250,000), and equivalence of about USD 19,000. Dr Dlamini Zuma said her motivations for donating her SATY Award winnings to Thusanani Foundation is in line with her strong conviction to support the youth training and skills development. “If sustained progress is to be made on the development of our continent, especially in light of the realisation of Agenda 2063 – The Africa we want, we must embark on and support the skills revolution,” Dr. Dlamini Zuma said. “The Thusanani Foundation is a well-established, youth-based and led organisation, which is committed to promoting training, and education and bridging the education information gap between township/rural and urban kids”. Dr. Dlamini Zuma explained further. She went on to highlight the fact that the organisation was established by young people to meet the needs of other young people, concluding that “these are the sorts of actions and innovations I love to support because they are what Africa needs in order to march confidently into the future.” The Thusanani Foundation, with an objective to provide “a holistic approach to youth development”, was created in 2011 with a mandate to “break the cycle of poverty through ensuring access and success in institutions of higher learning and sector specific/industry related skills development.” They also offer career guidance, mentorship and advisory services, peer to peer life skills development, information relating to higher education funding opportunities, etc. The foundation targets students between grades 9 and 12 in South African township and rural high schools, as well as first and second year students in universities and technical colleges. They currently have partnerships with a number of South African Universities and other institutions of higher learning, including the Universities of Johannesburg and Witwatersrand. They have facilitated the enrolment of over 300 students in 10 institutions around the country, with over 180 enrolled in 2014 alone. Dr Dlamini Zuma already provides a standing contribution of R1000 to Thusanani Foundation each month. And her hope is that this ZAR 250,000 from the SATY 2015 Awards will be used as seed money to establish an Endowment Fund for the Thusanani Foundation. The ceremony to officially hand over the cheque to the Thusanani Foundation will be announced in due course. *APO]]>