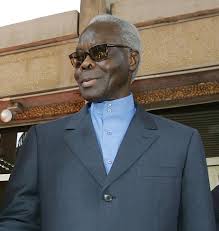 Benin’s former President Mathieu Kérékou[/caption] The Chairperson of the African Union Commission, H.E. Dr. Nkosazana Dlamini Zuma, has expressed her condolences to the government and people of Benin following the demise of Benin’s former President Mathieu Kérékou at the age of 82 The death was announced on Wednesday 14 October2015.. In her message, the AU Commission Chairperson said she was saddened to learn of “the great loss of one of Africa’s elderly statesmen” and expressed her heartfelt condolences to President Yayi Boni and to the people of Benin, on behalf of the AU Commission and the African continent. President Kérékou ruled Benin for 30 years, after a 20-year one-party state reign and two democratically-elected terms in office. He stepped down from power in 2006, aged 72, after reaching the constitutional age limit to serve as President. He also gained respect as a mediator in a number of conflicts on the continent, notably in the peace process in Cote d’Ivoire, and as head of the Conseil de l’Entente, a body aimed at building closer links between the West African francophone countries of Benin, Togo, Niger, Cote d’Ivoire and Burkina Faso. Benin has declared seven days of national mourning following the death of its former leader.]]>