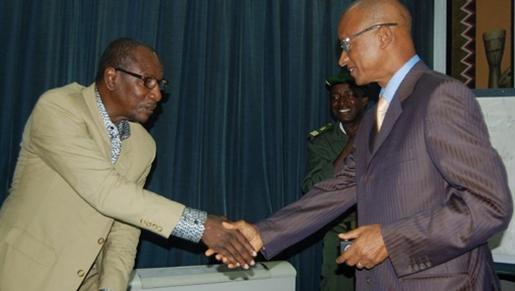 Incumbent Guinea President Alpha Conde (l) with presidential contender Cellou Dalein Diallo (r[/caption] The African Union (AU) Commission Chairperson, Dr. Nkosazana Dlamini Zuma has commended the people of the Republic of Guinea for holding peaceful presidential elections on 11 October 2015, despite initial turmoil some days preceding the polls. “The mass participation and eventual spirit of tranquility in which the election proceedings were held is a final testament to the Guinean peoples’ understanding of the importance of peacefully exercising their civic rights”, the AU Commission Chairperson said. “We now call on all parties to respect the voice of the electorate and to preserve the peace. We encourage any individuals or groups with elections-related disputes, to seek non-violent and established mechanism to address them.” she added. The polls saw the participation of over six million of voters, called to choose a president among eight separate candidates. Pre-election processes were, as earlier stated, characterized by violent conflict among various groups, looting and clashes between forces of the incumbent and the opposition; which left the general atmosphere in the country largely precarious and tense. The African Union strongly condemned the pre-election violence and looting. The continental organization deployed 30 short-term election observers across the country on 4 October, with H.E. Dileita Mohammed Dileita, as the Head of AU Mission. It is scheduled to release its preliminary statement on 13 October 2015 from Conakry. *Source APO]]>