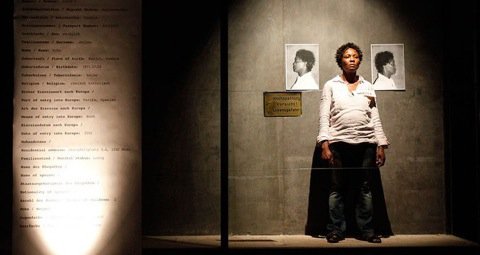 A woman poses in Brett Bailey’s art installation[/caption] Economic Community of West African States (ECOWAS) governments have been urged to shift their focus from timber, cocoa and minerals exports, and introduce relevant polices and funding into arts and culture to rapidly expand their economies. “Giving meaning to the role of arts and culture manifested in traditional music, dance, clothing and drama can earn countries billions of dollars to spur growth and create jobs,” culture experts meeting in Ghana’s capital, Accra said. The stakeholders from Ghana, Nigeria, Sierra Leone, Gambia and Cote d’Ivoire are discussing the status of culture and arts sector in West Africa and the potential for growth and development under the EU-ECOWAS economic partnership agreement. The culture and creative arts industry is said to be the fastest growing sector of the world economy, with estimated growth rate of 7 per cent of the world’s gross domestic product. “This growth is accounted for by rapid techno-economic change in products manufacturing distribution and marketing and the increasing commercialising of intellectual property in the digital world,” director of the Centre for Cultural and African Studies of the Kwame Nkrumah University of Science and Technology, Vesta Adu-Gyamfi said. “Member countries ought to strengthen exchanges and co-operation between cultural entrepreneurs and artistes from West Africa and Europe to promote trade between the two regions.” The United Nations Educational, Scientific and Culture Organisation (UNESCO) also reports that world trade of creative goods and services recorded $624 billion in 2011, more than doubling between the years 2002 and 2011. The growth in developing country exports of the sectors’ services averaged 12 per cent annually between 2002 and 2011, but analysts say West African governments pay lip service to that area and failed to exploit its economic benefits. “Culture is a powerful tool for poverty eradication, helping to meet the ambitious goal to reduce the number of people living on less than $1.25 a day to 3 per cent of the population by 2030,” UNESCO said in a statement to welcome participants from the West African sub region. “Governments have been paying lip service to the cultural sector, but it is very important they see the cultural sector the same way as they see agriculture, mining industry or crude oil and to come out with relevant policies,” team leader of ACP Cultures Plus Culture Policy project told The Africa Report. “If you are investing in the mines to get value out of it or crude oil or oil ore to get value, you should also similarly invest in the cultural sector to get value, so governments should come up with relevant policies as well as provide funding to grow the sector,” Chris Addy Nayo said. “Our culture is rich, very rich, more than some of these foreign products we tend consume,” he said, but the problem had been about the quality stemming from standardisation and packaging issues. “The same way governments invest in other products in the market, they must also respond to these challenges (faced by culture and arts) to ensure our culture and creative arts are packaged nicely to attract foreign taste and bring in the necessary income,” Nayo said. “Foreign cultures attract us not because they are better than ours but because they pay attention to these things.” ECOWAS members were called upon to support artistes with training and offer them opportunities to collaborate with international partner organisations to help quality, standardisation and packaging. Cultural and creative industries offer countries the opportunity to diversify, expand and strengthen national economies, thereby contributing to the reduction of social inequalities. The experts claimed that with over 1 billion people travelling around the world in 2012, the relationship between tourism and culture provides a unique opportunity to contribute to inclusive economic growth. *Source African Report
]]>