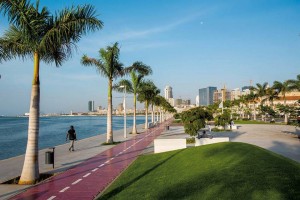 Luanda Bay, Angola[/caption] Angola announced the launch of sovereign debt bonds in the international market in the form of Eurobonds, amounting to USD $1,500,000,000.00 (one thousand five hundred million US dollars), under the Executive public finance management policy, in accordance with the long-term economic and financial development programme. Among the main benefits that this sovereign issuance may lead to are: 1. Diversification of sources of external financing – a bond issuance in the international market offers diversification of funding sources; 2. Establishment of long-term funding sources – in the process of sovereign issuance, the country has the opportunity to lay the foundation for establishing long-term relationships with international investors in all major financial centres worldwide; 3. Positive impact in terms of evaluation of Credit Rating Agencies – access to global bond markets could be a positive boost and increase confidence in the rating of bonds; 4. Construction of a yield curve – start of the process of creating the international yield curve, which enables sovereign nations to access capital markets easily and more often. 5. Possible increase in international reserves – an international bond issuance can help increase the inflow of foreign capital and soon lead to the increase of international reserves. It is noteworthy that the sovereign issuance now taking place on the London Stock Exchange culminates the efforts begun in 2011, when, given that recourse to traditional sources of funding (bilateral, commercial and credit facilities) was then quite concentrated, which from the point of view of risk management and the associated costs is not recommended as it increases the country’s exposure to a particular funder, the Executive considered the need to seek alternative funding sources. Thus the first steps were taken in the preparation of studies that could prove able to support a first sovereign issuance by Angola in the international capital markets. With this goal, the Angolan Executive, in addition to obtaining technical and legal advice from financial institutions of international renown, such as Goldman Sachs, JP Morgan, the World Bank and the International Monetary Fund, began to undergo regular assessments by the major international credit rating agencies. From the subsequent discussions it emerged that a sovereign issuance could potentially contribute significantly to enhancing the country’s image abroad, especially with regard to concerns relating to transparency in the management of public finances and the costs associated with the process of funding the general budget of the state, as these are essential in determining the solvency indicators of a country to honour its debt commitments in domestic and foreign currency. From this broad consultation process it became apparent that Angola could benefit greatly from sovereign issuance in international markets, not only because it could benefit from diversification of external sources of funding, but also because it was found that following the considerable social, political and economic progress that the country had achieved since the end of armed conflict, European and American investors would be greatly attracted to investing in the bonds that the Angolan state was to issue. After a long and painstaking process of study and consultation on the feasibility, convenience, acceptability and resultant cost of a sovereign issuance on international markets, the President has granted a Letter of Mandate which authorizes the international financial institutions (i) Goldman Sachs International, (ii) Deutsche Bank and (iii) the Industrial and Commercial Bank of China (ICBC) to act as agent banks on behalf of the Republic of Angola for the sovereign issuances that the country is now carrying out. Bearing in mind the enormous efforts invested in achieving this project, and the importance it represents for the sustainable financing strategy of the National Reconstruction Programme, the Ministry of Finance congratulates all those who, in one way or another, have contributed to this project being brought to fruition. *APO]]>