Tunde Eludini* The African Union Advisory Board on Corruption [AUABC] has unanimously adopted President Muhammadu Buhari to play a leading role in efforts to rid Africa of corruption. 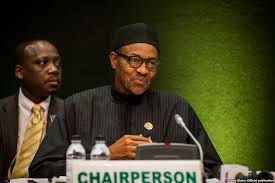 A member of the Board of the organisation, Isa Ozi Salami, disclosed this in Lagos on Thursday during the formal launch of Nigeria’s foremost association of publishers of online newspapers, the Guild of Corporate Online Publishers [GOCOP]. The African Union Advisory Board on Corruption is an autonomous organ established within the African Union [AU], in terms of Article 22 of the African Union Convention on Preventing and Combating Corruption. The main mandate of the Board is to promote and encourage the adoption of measures and actions by State Parties to prevent, detect, punish and eradicate corruption and related offences in Africa as well as to follow-up on the application of those measures and submit a report to the Executive Council on a regular basis on the progress made by each State Party in complying with the provisions of the Convention. Experts believe corruption is widespread in many African countries, with a High-Level Panel on Illicit Financial Flow saying African nations lose between $50 and $60 billion annually through illicit financial flow. Mr. Salami, who represented the Chairman of the Independent Corrupt Practices and other Related Offences [ICPC], Ekpo Nta, at the GOCOP launch, said Mr. Buhari emerged the continent’s preferred leader to lead a vigorous anti-corruption war during the last AUABC meeting held in Arusha, Tanzania. “At the second meeting of the board of AUABC in Arusha, Tanzania, the headquarters of the board, we resolved that on corruption in Africa, we needed to adopt a champion for salvaging the continent from the evils of corruption, Mr. Salami, who was elected to the board of the organisation last year, said. “And President Muhammadu Buhari was the person we unanimously endorsed for that purpose.” Mr. Salami, also a member of the board of the ICPC, said the endorsement of Mr. Buhari for such important continent-wide campaign had far reaching implications, which among other things, showed that Africa was beginning to reckon with the Nigerian leader in his renewed fight against corruption in his own country. He also said the endorsement of Mr. Buhari showed that Nigeria was again returning to her leadership position on the continent. “It means that Africa is beginning to give Nigeria its right leadership status and respecting Nigeria for the efforts our new leadership on anti graft crusade,” Mr. Salami said. President Buhari has since May 29 this year, when he assumed office, emerged one of Africa’s loudest advocates of a corruption-free society, vowing repeatedly to prosecute those who plundered his country’s wealth in the past. In the run-up to the 2015 general elections, Mr. Buhari’s campaign speeches were incomplete without a mention of how corruption had damaged his country and its institutions and how he would turn things around. “We plan to put priority on tackling corruption which has become blatant and widespread,” he said at one rally, vowing to rescue his country from the “stranglehold” of the PDP, which was in power at the time. “The rest of the world looks at Nigeria as the home of corruption. Nigeria is a country where stealing is not corruption.” ‎ At his last campaign speech before the presidential election, Mr. Buhari emphasized that his government would have zero tolerance for corruption. “I will set a personal example and run a government that truly serves the people rather than serve themselves and a privileged few,” he said at the time. “Like I have repeatedly maintained that if Nigeria does not kill corruption, corruption will kill Nigeria,” he warned. At a speech he gave at the United Nations in September, Mr. Buhari called on the international community to urgently redouble its efforts to strengthen mechanisms for dismantling safe havens for proceeds of corruption. Addressing world leaders at the 70th General Assembly of the UN, the Nigerian leader also urged his counterparts to do more to return stolen funds and assets to their countries of origin. Observing that corruption, cross-border financial crimes, cyber crimes and human trafficking are major challenges of the 21st century which the international community must work collectively to overcome, President Buhari reaffirmed his administration’s determination to frontally confront the twin evils of corruption and illicit financial outflows. *Source Premium Times]]>