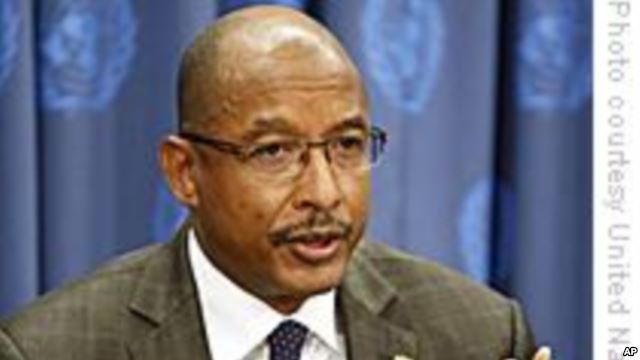 NEPAD CEO, Dr. Ibrahim Assane Mayaki.[/caption] The head of the New Partnership for Africa’s Development (NEPAD) says it is the responsibility of African regional blocs to prevent heads of state in their respective regions from changing the constitution that paves way for them to seek new terms after their terms expire. NEPAD is an economic development program of the African Union, which aims to provide the vision and policy framework for accelerating economic co-operation and integration among African countries. In an interview with VOA, Dr. Ibrahim Hassane Mayaki says the African Peer Review Mechanism is not to blame for the lack of action on strengthening democratic institutions on the African continent. Several African countries including Rwanda and Congo Republic plan to change the constitution that would enable their presidents to seek new terms after their two terms expire. Mayaki says the regional groups should learn from the stance taken by the Economic Community of West African States (ECOWAS). ECOWAS suspended Niger’s membership and put pressure on former president Mamadou Tandja after he attempted to change the constitution to seek another term when it was set to expire in 2009. Tandja was subsequently ousted by the military in February 2010. “That action… in the context of what the African Union calls the subsidiarity principle, which means that events that occur in a regional space are first tackled by that regional space, in order to find the necessary solutions,” said Mayaki. “It is the responsibility of each regional economic community really to tackle this issue, and the African Union is supporting the regional communities, when they tackle these issues.” Critics say NEPAD’s Africa Peer Review Mechanism, which reports on the performance of African governments on governance issues, has failed to carry out its mandate. They also said the APRM has not been proactive enough to sensitize Africans about the need to push back attempts by their leaders to change the constitution to seek another mandate. Mayaki disagreed. “You cannot blame the APRM of not acting… Because the APRM has always drawn the attention on these types of issues within the reports… Then the report is presented and a discussion is engaged with the head of state of a country in order to ask him on the clarification on the challenges that were mentioned in the report,” said Mayaki. “The APRM is doing its job of really tackling taboo, controversial, difficult issues like these ones and mentioning them. The APRM is not a political institution in terms of taking a public stance. But it is a mechanism that has proven through the conclusions of its reports that it tackles the hard issues like amendment of constitutions, xenophobia, rigging elections, [and] lack of women participation in public life.” Civil society and opposition groups have often rejected outcomes of elections in Africa where an incumbent president has comfortably won. They accuse ruling parties of voter irregularities including multiple voting, intimidation and harassment of opposition supporters, which they say undermine the credibility of elections. But Mayaki says the quality of elections has significantly improved in Africa. He also cited instances where incumbent leaders have lost elections and have peacefully handed over to their opponents. “If you look at the quality of elections that take place, the existence of free speech, the existence of opposition political parties, multipartism and we compare with many countries in the Middle East, we are far ahead,” said Mayaki. “Nigeria was a big success story, when President Goodluck Jonathan accepted his defeat and handed over to President [Muhammadu] Buhari, and it did contradict all those who were thinking the elections were going to be rigged or manipulated,” said Mayaki. “It is the beginning of a huge change because, given the role that Nigeria is playing in the regional integration process in West Africa, given the role that Nigeria is playing on the continent as a leader, this experience will have a direct consequence on all the elections that will take place. *Source VOA]]>