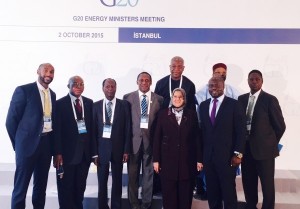 Mamadou Touré with a delegation of Arica energy leaders at the G20 preparatory meetings in Istanbul, Turkey[/caption] Founder of Africa 2.0 and CEO of Ubuntu Capital, Mamadou Touré’s attendance at the Pencom World Pensions Summit in Abuja, was instrumental for highlighting Africa’s future development projects. “Only 2% of Power Projects have defaulted in Africa while 10% have defaulted in the US” said M. Touré Quoting Moody’s latest report on Global Infrastructure projects. While enforcing his views on addressing global risk perceptions on African projects, he presented his vision and approach on how to channel pension funds money into infrastructure projects. The audience of high caliber investors acknowledged the huge potential returns generated by home-grown infrastructure projects and vowed to design new investments solutions to boost the sector. World Pension Summit Africa was successfully initiated and is led by Pencom MD Mrs Chinelo Anohu-Amazu, instigating Nigeria as role model with her pension reform. Hence the platform has become a gathering of reference for sharing professional standards and best practices from around the world. “It was a no brainer that it would be the ideal venue to create a discussion platform for Africa’s infrastructure projects” said, Mamadou Touré as Chairman Ubuntu Capital Group, who was invited among 3 financial pension experts to speak, on the panel “The Real Deal: structure in pension investments for sustainability”. His message was an awakening for some; calling it a fresh view on how even a portion of 500 Billion USD available in African Pension Funds would be revolutionary if used for infrastructure projects. As a first time host at the G20 preparatory meetings, the Turkish President invited amongst its first participants, Founder of Africa 2.O& CEO Ubuntu Capital, MamadouTouré, who led a delegation of Africa Energy Leaders. His opening remarks resonated with many, emphasizing the need for increased multilateral engagement and unity both internally and externally surrounding energy development efforts in Africa (estimated $100 billion USD per year needed). Africa could bridge its energy gap by consolidating traditional energy sources capitalizing on the continent underground resources as well as by leapfrogging to latest technologies on clean energies for small scale distributed power (in urban and rural areas) using new business models empowering local energy entrepreneurs. These recent events signify a systemic build up to the actualization of new and old projects; making the Africa 2.0 Annual Leadership Symposium in Maputo(on November 24-26), the next real deal for thought engaging talks to financing infrastructure development in and for Africa. Africa 2.0 is a pan-African civil society organisation providing a platform for emerging and established African leaders to drive forward the transformation of Africa. Founded in 2010 around the belief that with a unifying vision and a focused “coalition of the willing”, Africans can accelerate the development of their continent. Our vision and goals are set out in our Manifesto. This guiding document was written by African thought leaders and experts, and sets out sustainable and thoughtful solutions to Africa’s challenges that will result in lasting change. *APO]]>