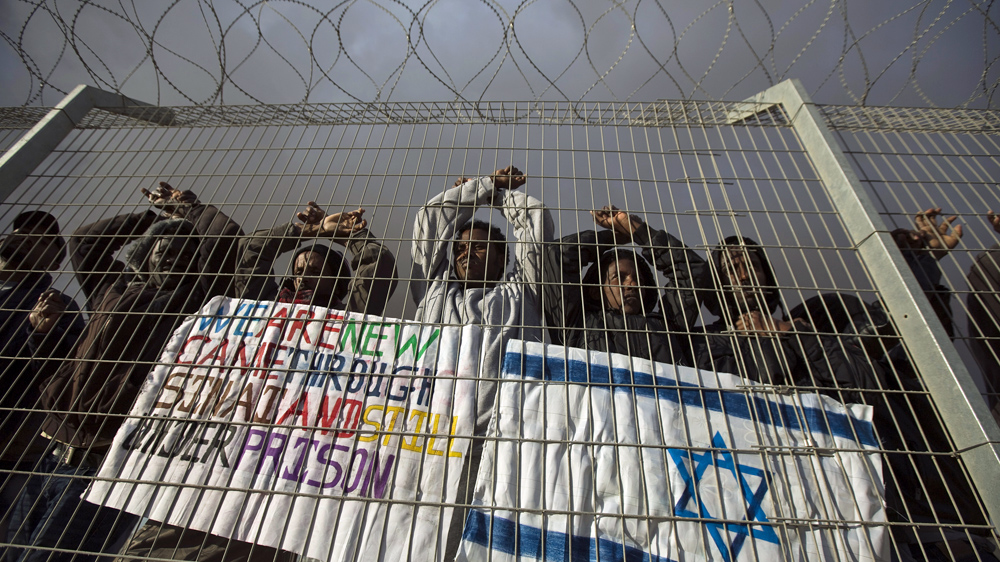 Garding, Germany – Brahane Tesfay, a 21-year-old asylum seeker from Eritrea, is one of thousands of refugees who have come here after a desperate journey for a better life.

But Germany wasn’t Tesfay’s first stop. He arrived at the end of April after spending more than five years attempting to start anew in Israel.

Now, in the small town of Garding, about 140km northwest of Hamburg, Tesfay is finally registered as an asylum seeker. Israel, he said, “was not a good [place]”.

An Eritrean man died on Sunday after being shot by Israeli security forces then beaten by a mob after a Palestinian attacker targeted a bus station in the city of Beersheba. The Eritrean bystander, Haftom Zarhum, 29, was apparently mistaken as the attacker’s accomplice.

Tesfay fled Eritrea when he was 15 years old to avoid being forced into mandatory military service. His older brother went with him, and they crossed Egypt’s Sinai Desert to reach the Israeli border.

“There is a siege mentality in the [Eritrean] regime. [Military service] has now become indefinite; huge numbers of people are ageing in the trenches – you have to sacrifice everything,” Yohannes Woldemariam, an Eritrean and associate professor of international relations at Fort Lewis College in the United States, told Al Jazeera.

In Israel, Tesfay was taken to Nitzana, a boarding school for undocumented minors. He lived there for more than two years. When he graduated he went to Kfar Sava in northern Israel, and worked as a waiter. But it was not always easy to find work. He said he received racist remarks from people in the streets, and was ultimately denied asylum.

“Today’s refugees are brown, black, Muslims,” Woldemariam said. “You can’t compare it to really anything, maybe in the case of the African slave trade. At least during the slave trade they were wanted for something.”

Late last year, Israeli authorities summoned Tesfay. “I asked them for a visa and they said you either go to Holot camp or leave,” he recalled.

Holot is a controversial refugee detention centre in Israel’s southern Negev Desert. Rights groups have called for its closure, accusing the Israeli government of human rights abuses there.

“People that have been living here for five to six years are suddenly torn out from their lives and sent to a prison,” said Anat Ovadia, a representative from Hotline for Refugees and Migrants in Tel Aviv. “There is no judicial review, and it is operated by the Israeli Prison Service.”

In August, an Israeli court ordered the release of more than 1,000 asylum seekers at Holot, after declaring that detainees could not be held for more than 12 months at a time.

Instead of being sent to Holot, Tesfay decided to leave Israel and accepted $3,500 and a flight to Rwanda from the Israeli government in January. But, he said, Israel did not provide him with papers or identification.

When asked about Israel’s agreement with Rwanda to send Eritrean and Sudanese asylum seekers there, a spokesperson for the Israeli foreign ministry stated, “We are doing our best to find good solutions and good alternatives for economic migrants who have come to Israel.”

The International Refugee Rights Initiative released a report last month stating that Rwanda and Uganda did not consider the refugee claims of transfers from Israel, and without identity or support systems, asylum seekers were at greater risk.

“They’re not given any rights in Uganda or Rwanda,” Woldemariam said. “The land has become more dangerous than the sea.”

From Rwanda, Tesfay travelled to Sudan where he met 33-year-old Merhawi, another Eritrean travelling to Europe. The two travelled together and hired smugglers to take them from Sudan to Libya.

“Libya,” Tesfay recounted, “this was not good. It was the worst part.”

Merhawi, who did not want to reveal his family name in order to protect his wife and children, told Al Jazeera, “They [smugglers] often took us by force. They took money and our mobile phones.” The two men said they were kidnapped and abandoned by various groups in Libya for more than a month.

Tesfay recalled that he and Merhawi were in Libya when a video surfaced of African men being beheaded by a group linked to the Islamic State of Iraq and the Levant (ISIL). Initially, media reports said the victims were Ethiopian, but Israeli activists revealed three of the men were Eritrean and had been at Holot.

Just days before, Tesfay said he spoke with one of the men who was killed, whom he identified as his brother’s friend. “I don’t remember his name, but my brother gave me his number and told me I should meet up with him.”

They would never meet. The night the report surfaced, Tesfay and Merhawi were abandoned by their kidnappers, picked up by a new group of Ethiopian smugglers and hidden away.

In Libya, Tesfay and his group were charged $2,400 per person to be loaded onto a small boat with 360 other people. Life jackets cost them an extra $50. It took three days to cross from Libya to Italy, where rescuers picked them up. From there, they boarded buses and trains until they reached Germany.

While the incoming asylum seekers have overwhelmed German authorities, young men such as Tesfay are grateful that they were able to leave Israel.

“I learned the language of Israel, I learned there for two years, and they wouldn’t give me papers. I hate Israel for this,” he said.

But Tesfay is moving forward and said the first thing he wants to do when he receives refugee status in Germany is to learn how to drive a car. “I want to be free on the road.”

Meanwhile, Merhawi said he hopes to study politics and law to better understand his country. “We never thought Eritrea would be like this,” he said. “It is a dictatorship.”

Woldemariam said he doubts that many of the migrants fleeing Eritrea will ever come back. “These young people that are migrating, I don’t see them returning. Once you’ve been away, what do you have to return to?”

For now, Tesfay is taking German language classes three days a week. In his small apartment, while he waits for asylum, he feels safer than he ever has before.

But he said he still worries about his brother, who was taken to Holot just last month.

The post A refugee’s gruelling odyssey – from Eritrea to Germany appeared first on African Media Agency.