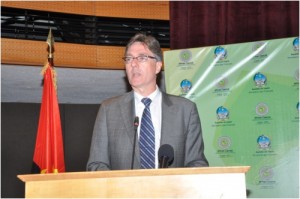 World Bank (WB) Vice-President for Development Finance, Joachim] Von Amsberg[/caption] The World Bank (WB) Vice-President for Development Finance [Joachim] Von Amsberg asked for the support of members of the African Caucus to raise funds to replenish the International Development Association (IDA). In order to finance development in an intelligent fashion, the WB needs to mobilise some US$135 thousand million in Official Development Assistance (ODA). This amount will attract and leverage new public and private investments. “We have a large portfolio, a series of projects in preparation that will drive private investment. These are projects for which there is great demand and we are seeking to mobilise possible resources. There is the Ebola problem, floods in Malawi and the earthquake in Nepal as well, which is why the response budget for three years was already exhausted in the first year,” explained the World Bank VP in his presentation on the topic “Funding Options for ODA.” The record ODA replenishment of US$52.1 thousand million aims to maximize impact on development by leveraging public and private resources, in addition to knowledge, with solid results and efficiency at a low cost. The demand for regional projects in Africa remains large, and most resources are committed to regional infrastructure projects. “The strong replenishment of ODA and financial innovations are crucial to fulfilling the agenda for transformation in Africa,” he concluded. The current Chairman of the African Group of Finance Ministers and Central Bank Governors affiliated with the International Monetary Fund and the World Bank is the Angolan Minister of Finance; its first Vice-Chair is the Minister of Finance of Benin and the second Vice-Chair is the Minister of Finance of Benin (sic). The position of the organisation’s Secretary is held by the Egyptian Minister of Finance. *Ministry of Finance of Angola/APO]]>