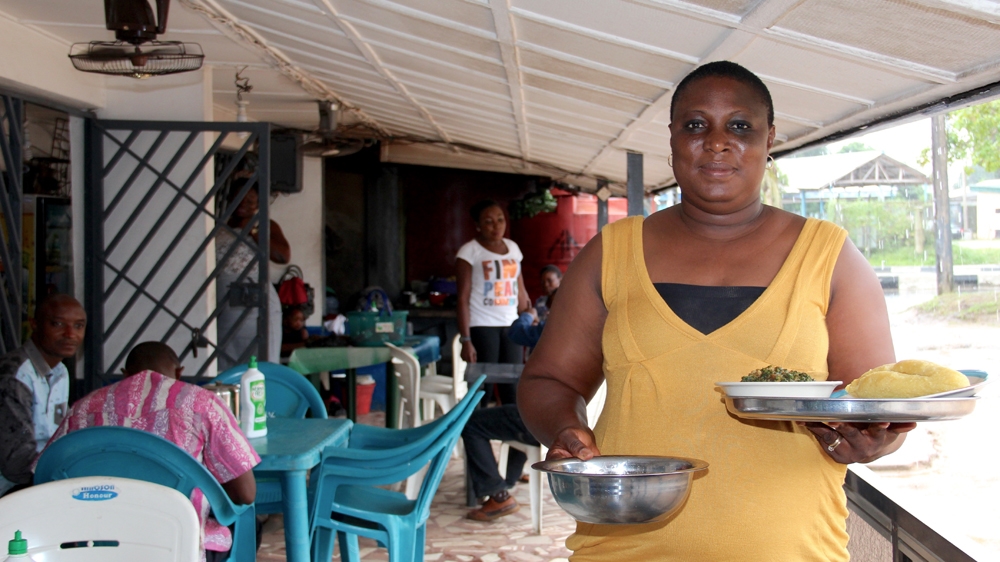 Golda Nse Ekanem has worked in the same place in Calabar for 17 years. At 42 years old, she is an economics graduate, has been married for 10 years, and is the owner of Appetite Delight, one of the larger restaurants on Ndidem Usang Iso Road (formerly Marian Road, as everyone still calls it). She started out in 1998 as a helper to her aunt, who opened the restaurant and managed it until she migrated to the US in 2001, leaving her business and its debts for Golda to handle.

“I was doing it like any man would do business,” Golda recalls of those difficult early days as the sole proprietor. “I went into it blindly.”

Her popular restaurant is the longest surviving in that section of Marian Road, and Golda attributes her success to the tastefulness her food. Appetite Delight is a Calabar Kitchen.

The seaport city of Calabar is lush with greenery. Trees and grass are everywhere along its well-kept streets; flowering plants blossom in residential yards and city centre roundabouts; carpets of moss spread across concrete surfaces. The tropical monsoon climate of this corner of southeastern Nigeria ensures that the city, with its 10-month rainy season, has the natural conditions for vegetation to flourish. But the people of Calabar doubtlessly play a role in keeping their city clean and green, as they also do in protecting the environment beyond the city limits. The largest area of undisturbed rainforest in Nigeria is in Cross River State, and Calabar, as its principal city and administrative seat, bears the stamp of the conservation policies first implemented by the ex-governor, Donald Duke, as part of a larger plan to attract tourists to the state.

The vegetative abundance of Calabar is represented in its cuisine. Restaurants that serve this region’s food, which is well-known across Nigeria for its richness and taste, are called Calabar Kitchens. In most cases, Calabar Kitchens are run by indigenes that learned their cooking at home rather than in catering school. Women from this region are sought after for employment in the hospitality business. The men, too, have a reputation for cooking – an unusual skill in larger Nigerian society, where the habitual view is that cooking is a woman’s job.

“I cook for my husband,” Golda says. In addition to running her business, she is a housewife. “Every morning, after devotion, I go around the house to see what is to be done,” she says. “I find out from my husband what he will eat … then I go to the kitchen and get breakfast ready.”

Golda departs for the restaurant after the housework is done. She arrives there every day between 9 and 10am, though the restaurant opens at 8am. In her absence, her younger sisters, Augusta and Jecinta, supervise the paid staff of three cooks and five helpers. “Without them, the work will be too much for me,” Golda says.

These days, her duties are more manageable, partly because of the Jeep her husband bought her. It’s the car she uses for the daily shopping rounds at several open-air markets, where she buys fresh ingredients like goat meat, catfish, and bunches of waterleaf, which she can’t store in large quantities because of Nigeria’s unstable electricity. “For the food to taste good, everything must be fresh,” she says.

The cooking is done in batches throughout the day. This keeps Golda and her staff busy right up until the doors close at 10pm. Every Monday through Saturday, the 15-table restaurant feeds 80 to 120 people; lunchtime is always the busiest part of the day. Golda observes that the first two weeks of every month are usually her most profitable period, because the majority of her patrons are salaried workers. “Calabar is a civil service state,” she says. “The money is not really flowing like in some other states.” The average cost of a meal at Appetite Delight is 700 naira (about $3.50).

As the restaurant begins to fill up with the lunch crowd, Golda keeps looking over shoulder in the direction of the bustling kitchen. A whiff of smoke wafts over from the six kerosene stoves on which all the cooking is done. Pans clatter in the kitchen as someone trips and falls, but the laughter of the kitchen staff is cut short when Golda yells, “There are customers waiting here!”

Golda’s menu is the same that can be found in any Calabar Kitchen in Nigeria. Her customers’ favourites are afang and edikang ikong soups eaten with starchy dough made from pounded yam, fermented cassava, or ground wheat. Nigerian soups are casseroles that contain a varying mix of ingredients including meat, seafood, snail, spices, palm oil, native vegetables, as well as seeds, roots or tubers used as thickeners. Traditional recipes usually feature less seafood as one moves further inland, and fewer forest spices and vegetables along the coastal areas. Calabar, however, is a seaport that abuts an enormous rainforest. It has the best of both worlds.

For Calabar food, the secret ingredients are time and money, says Golda. The variety of ingredients, some of them expensive and difficult to find, is what makes the Calabar Kitchen unique among Nigerian cuisines. She says: “By the time you put in all the ingredients and cook them well … the soup is so attractive and palatable, you will definitely fall for it.”

She contrasts this style of cooking with Yoruba cuisine, which she says “has nothing to give it taste”. The popularity of amala and ewedu, a Yoruba meal, is a mystery to her. “It might be tasty to them because it’s part of their culture, but [one who] is not used to it … will not like the taste.”

The largest ethnic group in Calabar are the Efik, and the menu of the Calabar Kitchen is mostly traditional Efik food. Golda is not Efik, but Yala, a minority ethnic group whose ancestral home is in the inland forests of Cross River State, quite some distance from the Calabar river basin.

None of the food Golda serves in Appetite Delight is originally from the Yala region. Several years ago, she introduced beniseed seed soup, a traditional Yala recipe she learned from her mother, to her restaurant’s menu, but she no longer sells the dish because it wasn’t popular among her patrons.

“What puts food on my table is what matters to me,” she says.

The post ‘What puts food on my table is what matters to me’ appeared first on African Media Agency.