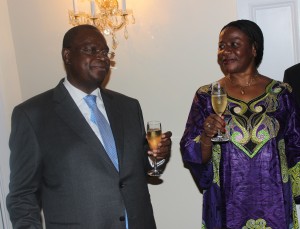 Ambassador Serge Mombouli with Ambassador Faida at the farewell party[/caption] On Tuesday night September 1, 2015, African Ambassador’s group in Washington led by Congolese envoy His Excellency Serge Mombouli, fêted one of its accomplished diplomats, Ambassador Faida Mitifu of the Democratic Republic of Congo as she prepares to leave the United States. Ambassador Mitifu, a US educated scholar who taught French Literature at the University of Georgia and also at Columbus State University in Columbus, Ohio, before she became Congolese Ambassador to the United States in 1999, enjoyed relatively a long fruitful 16 year tenure in Washington, DC. She reflected on some of her accomplishments. In addition to being an active part of the process that culminated in ending the long running civil war in DRC and paved the way for free elections, Mitifu said she is proud to  have been able to mobilize some $3 billion worth of investments in DRC while serving here. Friends and fellow Diplomats from Angola, Ivory Coast, Gabon, Rwanda, Guinea, Mali, Benin Morocco, Mauritania, Zimbabwe, Swaziland, Cape Verde and Ghana celebrated with speeches and food as they gathered in the sumptuous residence of the new Dean of African Diplomatic Corps, the Congolese Serge Mombouli who is taking over from Mitifu. Appointed as Ambassador in 1999, Mitifu, who considers Washington as the summit of any Diplomatic career worked hard to change the perception of a country torn by conflict. Colleagues lauded her for strong leadership and resilience in trying to redeem the battered image that her country had. [caption id="attachment_20400" align="alignright" width="300"] 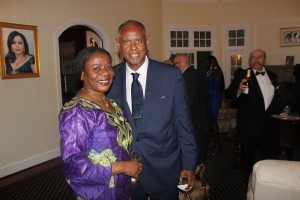 Melvin of the Constituency for Africa with Ambassador Faida[/caption] Melvin Foote of the Constituency of Africa saluted the role that Mitifu played in helping to change the perception that Washington has about Africa. If Africa is a lot more respected today and attracting more US investments, it is part due to the hard work and collaboration people like Ambassador Mitifu, Foote said. The emotionally charged but convivial farewell party was also attended by State Department officials, corporate personalities, Diplomats from the Caribbean, and African advocacy groups in Washington, DC and Ambassador Mitifu’s family.          ]]>