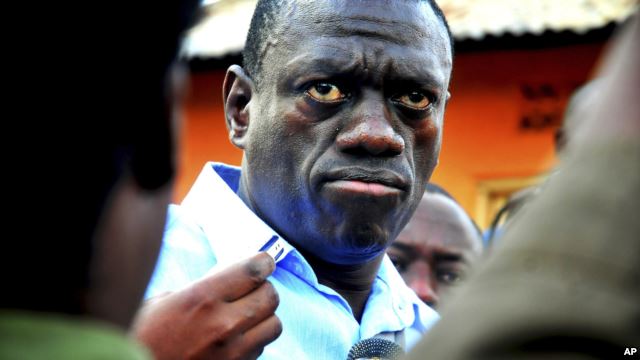 FILE – Ugandan opposition leader Kizza Besigye speaks to journalists.[/caption] Uganda’s main opposition leader Kizza Besigye said he and his Forum for Democratic Change (FDC) party are making preparations to go it alone in next year’s presidential election unless there is a change in the position of the Democratic Alliance. This came after the Alliance, a loose coalition of opposition parties, chose former Prime Minister Amama Mbabazi as its candidate to challenge President Yoweri Museveni in the 2016 presidential election. Mao Nobert, a supporter of Mbabazi’s candidacy told VOA last week the Alliance could not reach a consensus with the FDC because Besigye had not bowed out as a candidate for president himself. FDC reservations But Besigye, whose supporters believe he should have been the alliance’s candidate because he has the most popular appeal in the country, says his party had several reservations about the candidacy of Mbabazi. “We had three reservations regarding the candidature of the Honorable Mbabazi. The first was that having been in government for the past 30 years, we did not think that he had demonstrable commitment to the central tenet that we in the opposition have been driving to make sure that we have change in governance,” he said. Besigye said the second reservation his party has about the candidacy of Mbabazi is that the former prime minister has not shown a “structured” framework within which he’s operating.  He said no one knows who Mbabazi is working with because every time they see him he’s always alone. He said the third reservation his party has about Mbabazi is no one knows where the former prime minister stands on the key opposition demand for political and electoral reform in Uganda. Democratic Alliance to stick with Mbabazi Mao Nobert told VOA last week that the Alliance will continue to support Mbabazi for president with or without Besigye and his supporters. He said Mbabazi’s team had begun to put in place their strategy for the 2016 election. “We will discuss whether we can agree on how to cooperate, but the truth is we have reached a fork in the road and each group has chosen a different path. We hope the destination is the same because the goal of the alliance is to unite the democratic forces and win in 2016,” Nobert said. Besigye also said negotiations with the Alliance have ended and that his party was preparing to go ahead with its campaign. But he said in politics you can never say never. He said despite the concerns raised by the FDC, Mbabazi and his team were determined to offer his leadership to the Alliance. “If there is a new rethinking in the opposition we remain open-minded,” Besigye said. FDC: President Museveni has stolen elections Besigye said the inability of the opposition to choose a consensus candidate is not the only thing that can hurt their chances in 2016. He said the key obstacle is that there has never been a truly free and fair election in Uganda. “You see Mr. Museveni has never won an election; he has always stolen the election. It’s not the popular support for the opposition for the opposition that is the problem in this country. And that is why focusing on electoral reforms is very critical because Mr. Museveni has a comprehensive control of the election management system. And that makes it much difficult for any candidate. And that is why my campaign will be focusing on empowering citizens to reclaim their power,” he said. For his part, the Alliance’s Mao Nobert said the challenger who can defeat President Museveni is Mbabazi because Mbabazi is a newcomer to the opposition and brings the most recent information about the president and his political machine and the mindset. “Secondly,” said Nobert, “I do believe sincerely that the public respects novelty. In every society the people respect something new, they gravitate around it, especially when the old has not made a lot of traction.” Besigye said he agrees that former prime minister Mbabazi could have new information about President Museveni and his ruling National Resistance Movement. But he said bringing that information and those advantages would not necessarily require him to be the leader. *Source VOA]]>