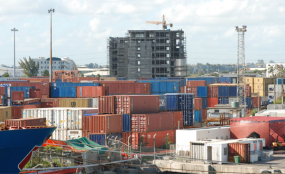 The U.S. Embassy to Addis Abeba, through its Foreign Commercial Service office, welcomed Ten U.S. Companies to Ethiopia this week as part of the largest U.S. government-led trade mission to Africa in history. The companies went through a day of meetings with Ethiopian government officials and area businesses, in an effort to facilitate new U.S.-Africa business deals. The Ethiopia visit was part of the U.S. Department of Commerce’s Trade Winds – Africa trade mission, which is ultimately bringing more than 100 U.S. companies to eight Sub-Saharan African markets. “Ethiopia is at the forefront of Africa’s economic development,” said Patricia M. Haslach, U.S. Ambassador to Ethiopia. “The country has shown its commitment to trade and investment through its Growth and Transformation Plan, and the United States government and the U.S. business community see Ethiopia as an important partner.” The Trade Winds mission is part of a concerted effort under the President Obama administration called ‘Doing Business in Africa’ campaign, under which the U.S. government has committed billions of dollars to development in Sub-Saharan Africa, and has facilitated billions more in U.S.-Africa business deals. “President Obama’s visit to Ethiopia was an important sign of how much the United States values Ethiopia as a partner,” Haslach said. “This mission is an important follow-up.” “I counsel many U.S. companies looking to do business here,” said Senior U.S. Commercial Officer Tanya Cole, who is based at the U.S. Embassy in Addis Ababa. “The stable economic growth, low corruption, and prime location make this a very attractive market.” [caption id="attachment_20795" align="alignright" width="300"]

United States Ambassador to Ethiopia, Patricia M. Haslach (Photo: U.S. embassy Facebook Page)[/caption] The delegation will travel to South Africa from Wednesday to Friday this week for business-to-business meetings and a business forum with regional leaders and U.S. and African companies including McKinsey, Sasol, and Ford Motor Company. U.S. commercial diplomats from more than 20 African countries will be on hand to provide market-specific counseling to attendees. Many of the U.S. companies are also visiting other markets on the continent. The trade mission will ultimately stop at eight countries: Angola, Ethiopia, Ghana, Kenya, Mozambique, Nigeria, Tanzania, and South Africa. At each mission stop, the U.S. companies meet with government leaders and potential business partners already based in Africa. All companies participating in the mission were vetted by U.S. Embassy staff to make sure their goods or services were appropriate for each market. The Commerce Department and Embassy teams expect to facilitate about 400 total business-to-business meetings during the trade mission. *Allafrica/Addis Standard]]>