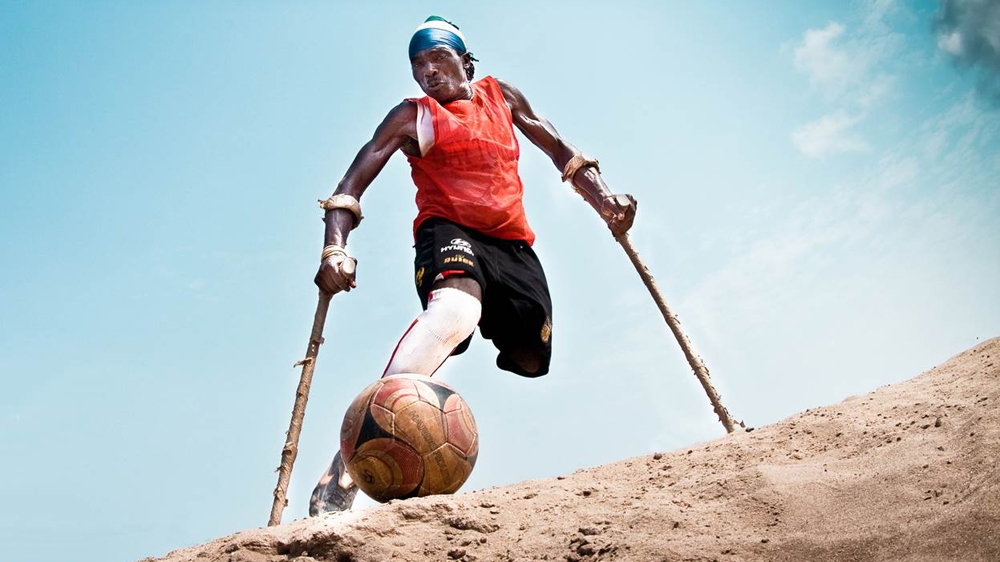 Team captain Bornor is an amputee who plays football in Sierra Leone to cope with the horrors of war he suffered a decade ago.

As he dreams of playing internationally, he wrestles with nightmares that haunt his daily life and threaten the very family he is trying to feed.

Can Bornor overcome his postwar trauma and score a victory for his children off the soccer pitch?

The civil war of Sierra Leone lasted from 1991-2002 and in that time rebel soldiers waged a campaign of terror by amputating innocent children, while soldiers stepped on landmines. Today, one in five amputees in the world lives in Sierra Leone.

Many amputees in this country beg on the streets and suffer housing and job discrimination in a country that regards amputees as ugly reminders of that war. If left untreated, Post-Traumatic Stress Disorder makes victims lash out at those around them, thereby perpetuating the cycle of violence unleashed by the civil war of the 1990s.

Amputee football is one of the few ways for the amputees to band together and find solace. The ‘beautiful game’ heals, and at the very least it provides structure and routine to the amputees’ lives. Football builds self-confidence and proves to their countrymen that the amputees are as capable as anyone as they soar across the football pitch to create acrobatic plays.

At home, however, he faces the everyday reality of feeding his family and himself. He begs and he strives to raise sponsor money, including that of the team’s patron, an American medical charity headed by Seattle nurse Lynn Pelton, who appears in the film. Sometimes it is enough, but just barely.

The war never completely left Bornor. He sees it with every step he takes on his crutches, and feels it each spring when his “anniversary pain” seizes his soul. However, his wife and children give him hope for the future.

Another theme of this film is that of the amputee players weaning themselves off foreign charities and finding ways to fend for themselves. Bornor embarks on studying a trade (repairing portable generators) as an investment in his future.

Sure, football gives him brotherhood, but a job feeds his family. Will he stay the course in a country with chronic unemployment and illiteracy?