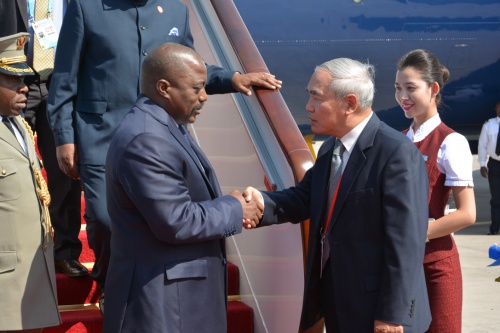 President Kabila arriving in Beijing[/caption] Democratic Republic of Congo (DRC) President Joseph Kabila travels to China on September 2nd to attend the commemoration of the 70th anniversary of the end of World War II and celebrate DRC Veterans who fought alongside Allied Forces during the war. While in China President Kabila will also meet various leaders including President Xi Jinping to review the status of current Sino-Congolese projects and discuss ways to strengthen and enhance relations between the two countries. Background on Chinese-Congolese Relations Over the last 25 years, Chinese investment in the DRC, as well as Congolese exports to China, have grown at a rapid pace. This is due to the interest by both nations to find mutually beneficial opportunities that strengthen and professionalize a variety of sectors. A recent RAND Corporation report (www.apo-mail.org/150902.pdf) concluded that bilateral trade between the DRC and China accounts for approximately 2 percent of total Sino-African trade. In 2008, the Chinese government entered into a contract with the DRC government for $6 billion USD worth of infrastructure projects—from the development of roads and railways to the construction of hospitals, health centers and universities in exchange for China’s participation in DRC’s mining investments. In addition to contributing to the DRC’s infrastructure capabilities, which in turn provide new opportunities to other foreign partners, th ese Sino -Congolese ventures have created thousands of jobs for the Congolese people, generated tax revenues for the DRC and provided a critical knowledge transfer between the two countries. “The work we have done with Chinese investors represents a critical development and capacity-building endeavor for the DRC, improving the lives of Congolese across the country by boosting employment and the economy,” said Mr. Moïse Ekanga Lushyma, executive secretary of the Bureau for Coordination and Monitoring of the Sino-Congolese Program. “These innovative projects strengthen key growth sectors and create opportunities for other foreign investors that are interested in capitalizing on the incredible potential of the DRC.” By the Numbers Infrastructure development Between 2008 and 2014, China invested in ten infrastructure projects in the DRC, including the development of roads, lots and a hospital. •          Approximate total spending on these projects currently in execution is USD $459.764 million In 2015, planned projects include the development of public arenas, roads, solar projects and more. •          Approximate total spending for these projects planned for 2015 is USD $250 million Export Growth to China Among the most illustrative examples of the capacity-building effects of the DRC’s economic relations with China is the growing volume of exports from the DRC. •          In 1991, there was a total of USD $68.34 million in trade between China and the DRC: