BBC West Africa correspondent Thomas Fessy looks at the lessons we can learn from the coup in Burkina Faso, which has been reversed just a week after the presidential guards seized power: 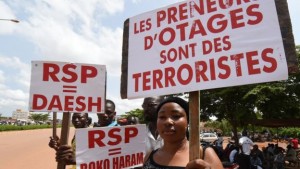 Some civil society activists were strident in their criticism of the coup plotters[/caption] General Gilbert Diendere’s mea culpa – however sincere it may be – contains, perhaps, the first lesson of this coup. “Human lives were lost,” he said, admitting that seizing power had been “a waste of time and resources for Burkina Faso.” Between 10 and 20 people were killed (the exact death toll is still unknown) and more than a hundred more were left injured with bullet wounds. Coups often have a human cost that is unnecessary.

2 – The goals behind the coup will not necessarily be achieved

Gen Diendere explained that the coup was precipitated by the interim authority’s decision to prevent associates of former President Blaise Compaore from taking part in the elections, and by a plan to disband the elite presidential guard. It remains to be seen whether the transitional government will now allow Mr Compaore’s allies to contest the elections, while the role of the presidential guard within the army will certainly be redefined. “The biggest mistake was to carry out this coup,” he said, “because nowadays, when we talk about democracy, we can’t afford such acts.” This was Gen Diendere’s third coup. He helped Thomas Sankara take power in 1983 and he then overthrew him, along with Mr Compaore four years later. Whether you look at Cpt Sankara’s popular support or at the 27 years that Mr Compaore spent in power, you may conclude that Gen Diendere’s first two coups were successful. This one was not. “We have taken lessons for the future,” Gen Diendere went on to say.

3 – Grassroots activists can make a difference.

This is the second time in less than a year that the people of Burkina Faso have succeeded in ousting those who they saw as trying to confiscate power. In October last year, when former President Compaore tried to change the constitution so he could run for another term in office, people took to the streets and forced him out. Civil society groups, and the youth in particular, have shown that in one of the world’s poorest countries, democracy may come from grassroots initiatives rather than built by a power-hungry elite.

In today’s Africa, there are military coups and what many call “constitutional coups”. The Burkinabe example has certainly spread democratic hopes and actions in Africa. Benin’s President Thomas Yayi Boni has since abandoned plans to change the constitution. Denis Sassou Nguesso of Congo-Brazzaville has just announced that he will hold a referendum over the very same issue. Let’s see whether the vote is free and fair. Of course, it doesn’t work everywhere on the continent yet but citizens are mobilising. [caption id="attachment_20946" align="alignright" width="300"] 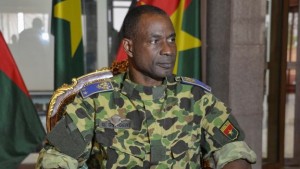 Gen Diendere has admitted his actions were a mistake[/caption] Burundi’s President Pierre Nkurunziza violently resisted months of popular discontent earlier this year. He eventually got his third term in office but at a bloody cost – dozens have been killed. His move sparked anger within the international community, including some African countries. In the Democratic Republic of Congo, grassroots activists have received support from their counterparts in Burkina Faso and Senegal but some of them have been jailed. President Joseph Kabila is widely believed to want to try to play with the election schedule to extend his rule. President Paul Kagame of Rwanda, too, has yet to clarify whether he will seek an extra term despite laws that prevent him from running again. The arrogance of power The Mobutu and Gaddafi effect

5 – African institutions have yet to show their teeth

In a rare show of strength, the African Union referred to the soldiers behind the coup as “terrorists”. The AU’s condemnation showed no room for compromise. However, West African leaders from the regional bloc Ecowas sent mediators who were seen as giving in to the coup leaders’ demands. They recommended that Mr Compaore’s allies be allowed to run in the elections and offered an amnesty to the soldiers behind the coup. This proposed plan didn’t go down well in Burkina Faso. It prompted regular troops – who sided with the protesters – to march on the capital city, Ouagadougou, to face Gen Diendere’s men. People expect stronger regional institutions. The population of Burkina Faso want the men who grabbed power and shot civilians dead to face justice. After all, the presidential guard nearly trashed months of national and international efforts to organise elections – why would they get away with it?

6 – Dialogue prevailed, even within the army

There were many fears of a descent into armed conflict when Ecowas mediators failed to reverse the coup over the weekend. Army chiefs sent regular troops to Ouagadougou but called on Gen Diendere’s men to return to their barracks rather than leading a straight offensive to forcibly disarm them. A tense stand-off ensued for 24 hours. But dialogue prevailed throughout as rival generals spoke several times and sought to find a peaceful solution to avoid further bloodshed. Burkina Faso’s army chiefs have given African armies a very important lesson in showing restraint and trying to avoid confrontation at all costs.

As rival senior officers gave dialogue a priority, they involved the traditional leader, or Mogho Naba, a well-respected, symbolic and neutral figure in the country. The Mossi king brokered a non-aggression deal between the presidential guard and the rest of the army, clearly avoiding the worst. He played a key role in appeasing tensions at a time when Burkina Faso could have slipped into serious violence. *Source BBC]]>