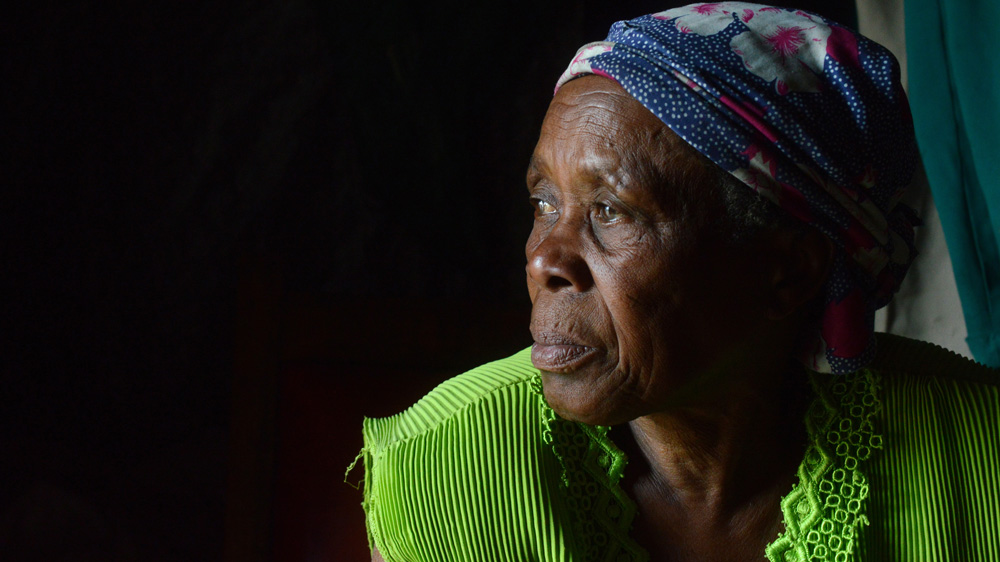 Bukavu, Democratic Republic of Congo – Inside a small wooden house overlooking the massive Virunga National Park, Bakazi Ndazimo, 70, relives the worst day of her life – the day she stopped feeling human; the day she was beaten and raped.

“The only reason I am able to talk about this is because of my age, and the fact that I am not going to remarry,” Ndazimo told Al Jazeera.

The attack happened in late November 2012, just after the M23 militia took control over Sake, Ndazimo’s hometown, situated 27km west of Goma in the eastern province of North Kivu.

She was cooking a meal for her grandchildren when a group of rebels stormed the house, grabbed her, and violently dragged her to another neighbourhood.

There, in the shadow of some tall bushes, she was raped by two soldiers.

“I was screaming at the top of my lungs when they ripped my clothes off, but the neighbours quietly went back to their houses and closed the curtains. For them it was just another rape,” Ndazimo said.

Only three weeks later, the family was targeted again.

This time a group of rebel soldiers came for Ndazimo’s daughter, who was raped so viciously she later died from her injuries.

She’s now buried in her mother’s humble back garden beneath a huge gravestone. Following the death, Ndazimo was left to take care of her daughter’s six children after their father abandoned them.

“After the rape and death of my daughter, I lost faith in humanity. I don’t expect anything from anyone any more,” Ndazimo said.

Thousands of women in the eastern DRC live with the stigma and trauma of rape.

Between January and September 2014, the United Nations Population Fund reported 11,769 cases of sexual and gender-based violence in five provinces in eastern Congo.

She works as a sexual violence project coordinator for the nongovernmental organisation Commission Diocesaine Justice et Paix. During her eight years of monitoring sexual abuse in the region, she has seen it all.

“This year we have been horrified by what seems to have been a wave of rape against babies and young children in Kavumu, South Kivu,” Mapenzi said. “It appears they have been kidnapped during the night and returned battered and bruised the following day.”

These dreadful discoveries come amid new hope that the Congolese government and the newly appointed presidential adviser on sexual violence and child recruitment, Jeannine Mabunda Lioko Mudiayi, will be successful in recent efforts to end impunity and limit the scope of sex attacks.

However, Congolese authorities recently decided to ban a documentary film about the famous surgeon Denis Mukwege, who had treated many victims of rape during conflict.

The authorities justified the ban, saying the film was harmful to the image of the country, reinforcing the reputation of the DRC as the “rape capital of the world”.

NGOs and human rights activists criticised the Congolese government for trying to cover up the truth.

“We need to reconstruct the whole system in order to combat sexual violence. This is not just done with a paintbrush,” said Mapenzi.

“Sexual violence is a consequence of many different things, such as extreme poverty, entrenched gender roles, war and in some cases, witchcraft.”

Ever since the war broke out in 1996, Congolese civilians have been subjected to sexual violence as a tool to destroy social harmony and trust among families, neighbours, and tribes.

“How can a mother and a son ever have the same relationship if the son has been forced to witness his mother’s rape? Or how can a daughter ever love her father again after he was forced to rape her? It’s impossible to go back to normal. The shame and pain is just too overwhelming,” Mapenzi explained.

One of the big challenges associated with sexual violence is the question of shame. The idea that a woman loses her value and purity as a result of rape has led many husbands and parents to discard their wives and daughters in the wake of sexual violence.

“When somebody abuses your dignity, it’s like being killed,” said 30-year-old Novayo Namakunda.

Namakunda, who has five children, was raped in 2013 when M23 rebels occupied her hometown, Kibumba.

A couple of weeks earlier she had been transferred to a nearby camp for internally displaced people. One day she decided to walk back to her house in Kibumba and get some pots and pans to take back to the camp.

But when she arrived at her house, she found seven rebel soldiers inside.

“They attacked me right away – and one by one they raped me,” Namakunda told Al Jazeera.

After the attack, she immediately sought advice from the town chief and elders.

She was afraid her husband would blame her for the assault – it’s not uncommon in the DRC to justify rape by claiming the woman acted in a promiscuous manner.

Even Namakunda said she thinks some women are to blame for the high number of rapes.

“Some girls dress and act in a certain way that attracts men. Those are the ones that ask to be raped, but I am not like that. Luckily my husband decided to stay with me,” Namakunda said.

Now she and her husband are trying to move on, however, she knows her life will never be the same again.

“Sometimes I feel empty inside – like I don’t have anything to offer to anyone. My husband doesn’t look at me the same any more. I have lost some sort of female value that I can’t get back.”

The post Scars of rape in the DR Congo appeared first on African Media Agency.