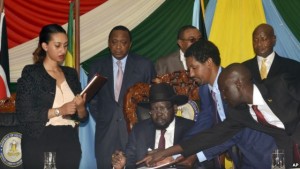 FILE – S. Sudan President Salva Kiir, seated, signs a peace deal as Kenya’s President Uhuru Kenyatta, center-left, Ethiopia’s Prime Minister Hailemariam Desalegn, center-right, and Uganda’s President Yoweri Museveni, right, look on in Juba, S. Sudan, Aug. 26, 2015.[/caption] South Sudan’s president, Salva Kiir, will address the nation on Tuesday about the need to ensure a successful implementation of the cease-fire agreement aimed at restoring peace and stability to the world’s youngest nation, according to Ateny Wek Ateny, spokesman for President Kiir. He says the president will call on the South Sudanese people to support the full implementation of the permanent cease-fire agreement he recently signed despite expressing reservations. Ateny says the administration in Juba has called on Washington to help monitor the cease-fire agreement following accusations that both sides violated the latest accord signed by Kiir and Dr. Riek Machar, former vice president and leader of the rebels. Ateny’s comments came after the government’s security delegation arrived in Addis Ababa, Ethiopia to hold discussions this weekend with rebel representatives. The talks were organized by mediators from the Intergovernmental Authority on Development (IGAD). Last week, South Sudan’s parliament ratified the cease-fire agreement days after the rebels also ratified the accord. Ateny says discussions at the workshop will include the full implementation of the permanent cease-fire agreement, disengagement of forces, establishment of demilitarized zones, withdrawal of foreign forces, and the cease-fire monitoring mechanism. “They are discussing how they can properly implement the cease-fire and the cease-fire mechanism, which is now agreed upon,” said Ateny. “Anything to do with security is within their parameters. But the presidential guard issue that would be here in Juba has been addressed in the agreement. So they cannot renegotiate that.” Both the government and the rebels have traded accusations about violations of the agreement despite reports the U.N. Security Council could consider targeted sanctions against those found complicit in undermining the cease-fire accord. Ateny says the administration has demonstrated its commitment to the peace accord. “Within the last two days the cease-fire has been holding and it has been quiet. It is only the last few days ago that the rebels have been active, trying to gain control of one of the major cities. But that has been thwarted by government forces. Their attacking forces were pushed back as the government fired in self-defense but [did] not go on the offensive,” said Ateny. “The leader of the government has urged IGAD and even the international community, and many statements were issued to that effect, and we have even asked the United States of America to fill the gap because up ’til now the implementation metrics or the monitoring of the cease-fire is still lacking. You cannot determine as to which force is attacking and which force is defending itself,” he added. *Source VOA]]>