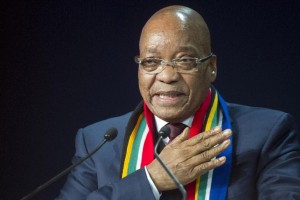 Zuma was saved partly by widespread resentment of the ICC’s perceived focus on prosecuting African leaders while countries such as the United States have failed to place themselves under the control of the Hague-based institution.

The opposition Democratic Alliance had sought to establish an ad-hoc committee to consider ousting Zuma over his alleged contempt of the constitution by failing to abide by a court order to prevent Al-Bashir’s departure from the country during an African Union summit in June.

The choice was between “the rule of law and the the rule of big men where might is right”, DA parliamentary leader Mmusi Maimane told the house.

He said Zuma had helped “a mass murderer” escape justice, and compared that to the pledge by South Africa’s first democratically-elected president Nelson Mandela that the country’s foreign policy would be guided by human rights issues.

Government minister Lindiwe Zulu said in response that Al-Bashir had immunity because he was attending a summit of the African Union.

Zulu said South Africa would “continue to uphold its national interests, and that of our continent, on the basis that we believe that our development is intrinsically linked to that of our neighbours.”

The motion to form an ad-hoc committee to start impeachment proceedings against Zuma failed to gain the necessary one-third votes in the 400 seat assembly.

But a key point in the debate was made by the radical Economic Freedom Fighters, led by firebrand Julius Malema, which said it supported the motion to impeach Zuma for a number of reasons, including corruption, but did not accept that the Al-Bashir affair was the right basis because of the ICC’s bias against African countries.

Another opposition party, the United Democratic Front, took a similar line, saying that the arrest of Al-Bashir would have “isolated us from the rest of Africa”.

Bashir has evaded justice since his indictment in 2009 for war crimes in the Sudanese region of Darfur.

He was welcomed in Beijing Tuesday by China’s President Xi Jinping, who described him as an “old friend of the Chinese people”.

China is not a member of the ICC, and nor is the United States, where Al-Bashir is tipped to attend the UN general assembly later this month.

It is unclear what action the US government might take over such a visit, but if it invokes the immunity provided for heads of state attending UN meetings, its condemnation of South Africa’s failure to arrest Al-Bashir would no doubt be seen as hypocritical.