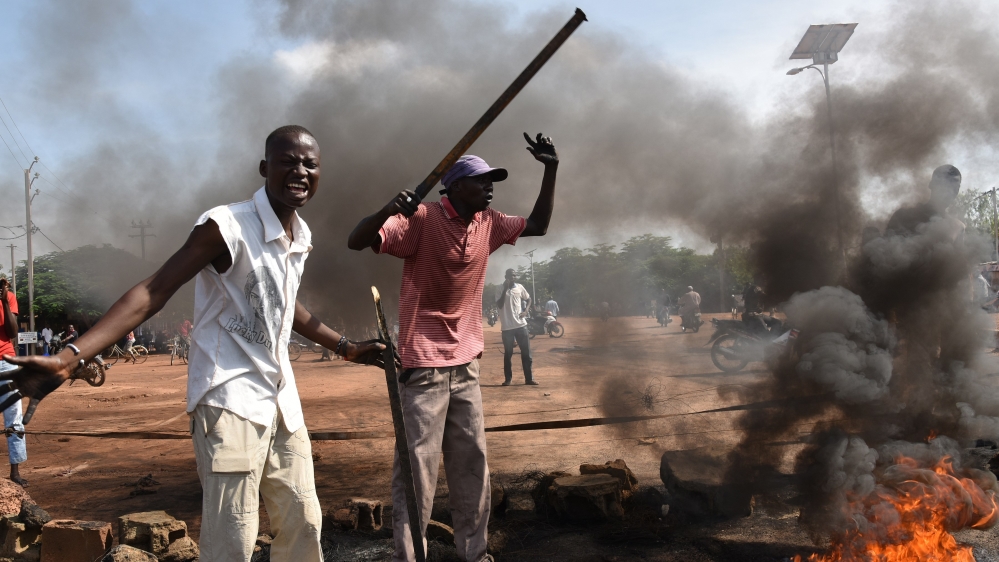 Demonstrators have taken to the streets of Burkina Faso’s capital, burning tires to protest a proposed compromise solution to the country’s deepening political crisis following a coup last week.

The protesters, who think the plan is too lenient on the military government, come as Burkina Faso’s army chiefs issued a statement ordering coup soldiers to lay down their arms.

The statement signed by several military chiefs called on members of the presidential guard, who staged the coup against the country’s interim government ahead of October 11 polls, to hand in their arms to barracks in exchange for safety guarantees.

“All the national armed forces are converging on [capital] Ouagadougou with the sole aim of disarming the presidential guard without any bloodshed,” it said.

Several people have been killed and dozens others injured during the subsequent demonstrations against the coup.

Regional mediators spent the weekend trying to broker a compromise between the military government that seized power in a coup last week and other politicians in this West African country. They announced a plan late on Sunday that calls for new elections by the end of November.

However, the general currently in charge of Burkina Faso did not attend the news conference where the draft agreement was read aloud and it was unclear whether he would abide by the plan that calls for him to step aside until the elections can be organised.

In a concession to General Gilbert Diendere and his supporters, the plan would allow loyalists of the former longtime president to take part in the vote.

One of the chief reasons cited for the coup was that an electoral code approved earlier this year banned members of the former ruling party from running for office.

Blaise Compaore served as president for 27 years, and his bid to further extend his rule prompted massive street protests and eventually led to his overthrow.

The plan drafted by mediators will go before the West African regional bloc known as the Economic Community of West African States, or ECOWAS, in Nigeria on Tuesday.

Under that plan, Diendere would step aside and the interim president he overthrew would be reinstalled until the vote.