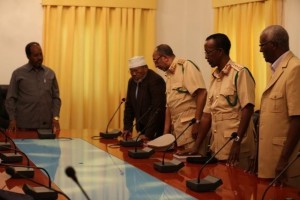 The New Chief of Somali National Army, Major General Mohamed Aden Ahmed and his deputy, Brigadier General Ali Bashi Mohamed Haji Omar, were sworn into service this week, taking their oaths of office in front of the President of the Federal Republic of Somalia, HE Hassan Sheikh Mohamud. The swearing-in ceremony took place at the Presidential Palace in Mogadishu. The President urged the new army commanders to continue apace with reform efforts. He recognised the valuable leadership of their predecessors, General Dahir Aden Elmi Indha Qarshe, and General Abdirizak Khalif Elmi. “The Somali National Army has made huge progress- particularly in the last year. The Federal Government is committed to supporting and covering the needs of the SNA. The brave men and women of SNA, with the support of AMISOM have succeeded in liberating most of Somalia from our enemy. I urge you to continue the good work begun by your predecessors and to bring peace and stability to Somalia,” said the President. The Prime Minister HE Omar Abdirashid Sharma’arke and other government officials were present at the ceremony. *APO]]>