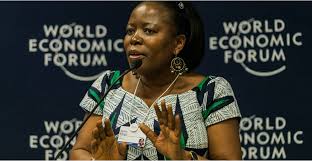 Dr. Sipho Moyo[/caption] “It gives me great pleasure to announce the appointment of Dr. Sipho Moyo, a citizen of Zimbabwe, as Director of Cabinet and Chief of Staff in the Office of the President” said Mr Adesina.. Dr. Moyo graduated with a Masters in Development Economics in 1989 and PhD in Financial Economics in 1994, both from Howard University, Washington DC, USA. She has had an illustrious career in international development spanning over 22 years. Until her appointment, Dr. Moyo worked as the Executive Director of the ONE Campaign, an international civil society organization, where she distinguished herself by significantly growing the organization and mobilizing strong advocacy and support behind major development issues in Africa. Prior to joining the ONE Campaign, Dr. Moyo worked at the African Development Bank for twelve years from 1998-2010, where she worked variously as Resident Representative and Country Manager for Nigeria and Tanzania country offices, Principal Country Economist and Senior Economist. From 1992-1994 she worked as Economist and Financial Analyst of the International Fund for Agricultural Development (IFAD), Rome, and at the World Bank. “I am delighted that Dr. Moyo will be joining us. She brings extensive experience in development and solid understanding of multilateral financial institutions. Her extensive managerial experience, deep understanding of critical development issues in Africa, passion for people-oriented development, advocacy and ability to achieve results, will add great value to the African Development Bank and its community.” Dr. Moyo will assume office on November 1, 2015. *AFDB]]>