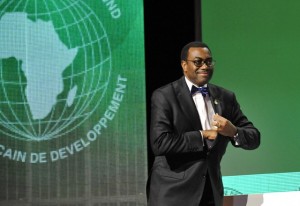 Speaking to a delegation of Ministers representing more than 40 nations spanning the globe, the President of the African Development Bank, Akinwumi Adesina, pushed for a New Deal on Energy in Africa to solve Africa’s energy crisis. The audience included the host of the 2015 Paris Climate Conference, COP21, Laurent Fabius, Minister of Foreign Affairs, France; as well as Manuel Pulgar Vidal, Minister of Environment, Peru; Khalid Fahmy, Minister of Environment and Chair of the African Ministerial Conference on Environment (AMCEN), Egypt; and leaders representing European governments, the G7, the G20 and other nations. Adesina also called for a binding agreement toward limited carbon dioxide emissions at the forthcoming COP21. He outlined the importance of the Paris Climate Conference, as presenting a unique opportunity to reach a lasting agreement on limiting carbon dioxide emissions and charting the way for transformative partnerships to address the adverse effects of climate change. To this end, he stressed, Africa’s voice is crucial for a successful outcome at COP21. “We need to support initiatives that address risks associated with climate change, and build disaster-response capacity and recovery programs for those who are most affected. This includes building their assets, providing catastrophic bonds, weather index insurance schemes, and crop/livestock insurance for farmers and rural populations,” said Adesina. Adesina called for strong political will, sharply focused partnerships, and ambitious financing programs to address climate and its impact on the millions of people whose livelihoods are under threat, especially in small, fragile, and island states, and the Sahel region. The Bank’s new President also highlighted three sectors for urgent action: building integrated and resilient energy systems, including both conventional and renewable energy; smart agricultural, land use and forestry systems; and boosting urban renewal – creating more resilient cities, with efficient water systems and smart, climate-friendly infrastructure. While endorsing Africa’s position on the need for more resources to address climate change adaptation and mitigation, Adesina assured world leaders of the Bank’s strong support for Africa’s transition to inclusive and green growth. He affirmed that the Bank will champion the implementation of the polluter pays principle and work with member countries and partners to support governance reforms, continental risk transfer and risk-sharing schemes, and building institutions that will support greater social and economic resilience in the face of climate change. He also announced that the Bank will expand its support to African countries to solve their energy and food security challenges, while ensuring inclusive and green growth. “Together, we must end Africa’s energy crisis and unlock Africa’s enormous energy potentials – both conventional and renewables,” he said. “This is why the African Development Bank strongly supports the Africa Renewable Energy Initiative and will cooperate with all stakeholders to launch a New Deal on Energy for Africa that will accelerate energy supply and access across the continent.” During his visit, Adesina held bilateral talks with Laurent Fabius and Helene Le Gal, Adviser to the President of France, and senior officials of the Agence Française de Développement to discuss strategic partnerships between the Bank and France. He also met with Khalid Fahmy, and other COP21 and G7 delegates to discuss the Africa Renewable Energy Initiative and the Bank’s New Deal on Energy for Africa. Adesina secured their support for the Bank to provide leadership to drive this Africa-led initiative. The Bank will host the drafting team of the Africa Renewable Energy Initiative at the Bank’s Headquarters on September 16, 2015 to finalize the action plan for the Initiative. On September 17 and 18, 2015, Khalid Fahmy will attend the High Level Consultative meeting on the New Deal on Energy for Africa convened by Adesina in Abidjan. Full Speech Here *Source AFDB]]>