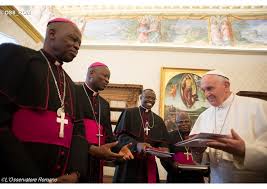 Pope Francis receives Bishops from Benin[/caption] ROME— Pope Francis will make his first trip to Africa in November, for a six-day visit that will take him to three countries, the Vatican said Thursday. The pope will visit Kenya, Uganda and the Central African Republic from Nov. 25-30, an itinerary that extends his practice of focusing his international travel on the developing world. Pope Francis has made poverty and the inequities of globalization major themes of his pontificate and is likely to address those topics during his African visit. The Central African Republic is one of the world’s poorest countries, according to the CIA World Factbook, with an estimated per capita GDP for 2014 of $600. Pope Francis’ visit to the CAR will take place a month after scheduled general elections, the first since 2011. Since that time, the country has been wracked by civil war between government forces and several rebel groups. The government still lacks control of the entire country. Kenya and Uganda have per capita GDPs of $3,100 and $1,800, respectively. The pope’s itinerary will allow him to address the broader concerns of French-speaking Africa, represented by the CAR, and English-speaking countries, which include Kenya and Uganda. Pope Francis’ visit to Africa will be his 11th trip out of Italy since his election as pope in March 2013. He is scheduled to visit Cuba and the U.S. from Sept. 19 to Sept. 27. *Source WSJ]]>