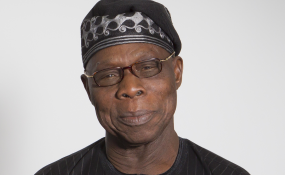 Former president Olusegun Obasanjo.[/caption] Abuja — A former president, Chief Olusegun Obasanjo has called on the international community and African leaders to address the factors forcing many youths to embark on the perilous journey to Europe across the Mediterranean. In a statement he issued Tuesday, Obasanjo said that Western powers should be honest enough to admit that it was partly responsible for the chaotic situation in Libya, the country many used as a route to sail to Europe.

He said: ‎”It is thus a matter of considerable sadness for me when I witness the current wave of desperate youths risking their lives to travel to Europe and the futile efforts of European countries to deal with those who have already set sail or have even reached shores of the European continent.”Although there are strenuous efforts to deny it, it is undeniable that the vacuum created by the lack of effective governance in Libya precipitated by the direct action of Western powers is responsible for the current anarchy in that country. “The current inflow of African refugees into Europe from Libya is a direct consequence.” *Source Thisday/Allafrica]]>