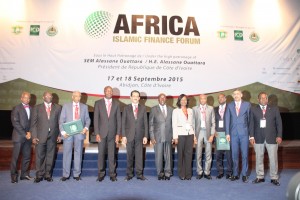 A newly-released report “Islamic Finance in Africa: A Promising Future” by the Islamic Corporation for the Development of the Private Sector (ICD) takes an in-depth look at the tremendous growth opportunities for Islamic finance to flourish in the region. The new report was released during the Africa Islamic Finance Forum 2015 in Abidjan. The report is being published as the global banking community comes together to define a transformative new landscape to integrate Islamic finance into the mainstream. Once of interest only to a niche market of Muslim investors, Islamic finance is now venturing beyond its traditional sphere, and is slowly gaining widespread acceptance in Africa. The birthplace of a quarter of the global Muslim population, the report highlights that Africa features a potentially strong demand for Islamic financial services and products. While still comparatively under-developed, Islamic finance is expanding in many parts of the region, and is now present across most of North Africa and in many countries of East and West Africa, particularly those with sizeable Muslim communities. One of the recommendations of the report is that Islamic finance can act as the catalyst in mobilising funding into Africa, thereby resulting in economic growth and sustainable development. It is estimated that the region needed USD93.0bln per year to finance large-scale infrastructure and manufacturing projects, while external funding is also needed to offset ballooning fiscal deficits. Meanwhile, 2 billion adults remain unbanked globally, and currently, sub-Saharan Africa alone accounts for as much as 17.0% of the world’s unbanked adults. In addition, there is a significant funding potential opportunity for Islamic banks in view of the increasing emergence of small-to-medium enterprises (SMEs) across Africa. In light of relatively low-income levels, a large informal sector and the prevalence of small businesses in Africa, Islamic microfinance is also a growth area worth looking into. The report also highlights notable progress in the sukuk sector, where recent developments have seen governments focusing more on creating a more enabling environment for sukuk issuances. Some countries which have issued sukuk include Gambia, Sudan, Senegal and South Africa, while Ivory Coast is lining up to issue its debut sukuk at the end of the year. Moving forward, several countries such as Tunisia, Egypt and Morocco have expressed keen interest in tapping the sukuk market for infrastructure financing and have finalized or are in the midst of finalizing their legal frameworks to promote sukuk issuances. Although the Islamic financial services industry in Africa is currently dominated by the banking and sukuk segments, growth potential remains in the asset management and takaful spheres. In its key recommendations, the report underlines that to capture the tremendous potential, the regional industry must overcome various challenges which are broadly similar with challenges faced in other parts of the world. These include challenges on the regulatory front such as regulatory inconsistency, the shortage of qualified human capital, the lack of awareness and financial literacy by many end-users and consumers, and a conducive business landscape which will support the growth of Islamic finance. *APO/ICD]]>