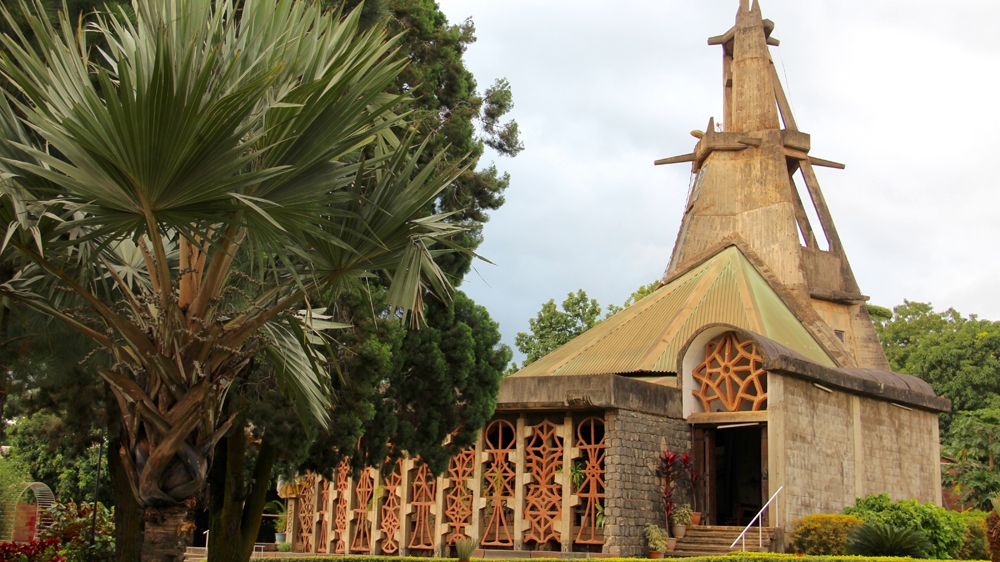 Dusk falls in Ibadan and the Dominican friars sing their evening prayers in reverberating harmony. The last rays of sun shine through the window of the chapel’s tower, illuminating the crucifix on the wall behind the altar.

One imagines it was the effect the chapel’s Nigerian designer, Demas Nwoko, had in mind. After all, he designed each detail of the building – large and small – with precision: from the way the lack of enclosing walls allows the air to circulate, the breeze blowing the brothers’ white habits as they sing, to the seats of the stools, carved like the imprint of a pair of buttocks.

Coming up the hill from Oyo Road, the tower of the Dominican Chapel is impossible to miss.

Its concrete palisades topped with a cross rise above the treetops like a ship’s mast. Consecrated in 1973, it is a landmark in Ibadan, a city about 120km from Lagos in Nigeria’s south. But ask any passer-by who designed it, and you will likely be met by a blank stare. Not many will have heard of Demas Nwoko, who is now 79 years old and leads a secluded life in the eastern Nigerian village where he was born.

The Dominican Institute in Ibadan was listed in the 2014 book 1001 Buildings You Must See Before You Die – along with three other of Nwoko’s buildings.

In international publications Nwoko’s work has been compared to that of Gaudi and Frank Lloyd Wright. But his architecture is not widely known in Nigeria, and his work is not systematically taught in the country’s architecture schools. And that, says his son Ashim, who followed in his father’s footsteps as an artist, is a shame. “My father might not have been trained as an architect, but neither were Michelangelo and [Leonardo] da Vinci,” he says.

Ashim Nwoko remembers the construction of the chapel very well. He was still in primary school, and after class his father would bring him to the site. “He always took us children along,” he remembers. “As a little boy, I have had my fair share of nails in my shoes.”

He witnessed just how involved his father was in every moment and detail of the construction. At the time, he was an artist lecturing at the drama department at the University of Ibadan, a short drive from the Dominican Institute. He was on site almost every day.

He would climb down into the foundation to set a pillar himself, remembers his son, and if a wall was not built according to his design, he would order it to be broken down brick by brick to do over.

“Some might say he is difficult to work with, but he is a perfectionist. He does not compromise in his work,” says Ashim.

After secondary school Demas Nwoko started working as a draftsman in the Public Works Department in Ibadan. There he met English architects designing English buildings for Nigeria, says his son. “He didn’t see real life in them. They had no connection to the place they were meant for.”

His father decided to train as an architect, but quickly realised that he would not find what he was looking for in architecture school, which concentrated more on the technical than the artistic. So, he borrowed money from his uncle to study art at the University of Zaria in northern Nigeria.

“He believed art was not just about creating beautiful things, but had to be on the forefront of technology and design,” explains Ashim.

Today, Ashim starts his tour of the chapel in one of the two shell-roofed entrances, pointing out the wooden door panels, the granite walls and the carved trees that reach up to the high ceiling like totem poles, all made of material found around Ibadan.

“My father doesn’t believe in importing. He looks at the raw material in the area and uses what he sees,” he says.

His designs reference local culture in much the same way that they utilise local materials, from the traditional sand casting technique used to create visually pleasing burglar bars in the chapel to the geometrical motifs on the landing’s cobblestones as well as the carvings on the pillars.

Even today, his father always looks to tradition when he wants to explain something, Ashim explains. In 1992, Demas Nwoko published a book titled The Impoverished Generation, in which he explored the possibilities of a democracy based on local, traditional values. He argued that the many institutions forced upon Nigerians since colonisation were alien to them, which led to corruption and poor leadership: or, put simply, what you do not understand, you do not value.

His father is indeed a traditionalist, says Ashim, but he doesn’t follow tradition for the sake of it. “He believes tradition is made by and for the people, and is dynamic, not static.”

As a builder, Demas Nwoko first and foremost believes in designing a building for the people who are intended to use it, he says, tapping his foot on the burgundy floor leading into the chapel. The pigment mixed into the cement gives it its reddish brown colour.

“It is polished by feet. No need to repaint it; it will get more beautiful with age,” Ashim explains. “My father knows we don’t have a maintenance culture. So he designs things to be maintenance free. In 20 years’ time, they must still look the same.”

Father Cletus Nwabuzo was 19 years old when he entered the Dominican order in 1980. He remembers the awe he felt when he first saw the chapel. “It looked like nothing I was familiar with. To me, it was part of the mystique of the religious community I was joining,” he says.

As the now 54-year-old priest walks by the ponds encircling the back of the chapel, he explains how, to him, the water has a theological symbolism. “It refers to the baptismal font. To get into the chapel, you have to cross that purifying water,” he says.

But according to The architecture of Demas Nwoko, a book written by two British architects in Nigeria in 2007, Nwoko had an alternative reason for placing the moat around the back of the chapel: He put it there to prevent future extensions to his design, knowing full well how churches in his country tend to mushroom.

When crime rates rose in Ibadan during the 1980s and armed robberies became more frequent, additions proved necessary. Nwabuzo describes the morning in 1982 when the brothers arrived at the chapel to find a blood trail leading into the sacristy.

“Apparently armed robbers had used it for a hiding place at night,” he says. That is when the order decided to put walls around the compound and to install steel-framed doors in the chapel’s sacristy and service vestry. “But we discussed it for hours. We did not want to distract attention from the original design,” he adds.

Through the years the chapel and other buildings on its grounds – Nwoko also designed the living quarters, refectory and school for the Dominicans – underwent some adjustments. Instead of the tiny tilapia they used to keep in the pond to chase away the mosquitoes, they now breed catfish to roast. Rails have also been attached to the stone steps into the chapel to support the older members of the religious order who have difficulty walking, and fans have been put up for the hot days when the cross ventilation does not suffice.

Today, they are considering building a ramp so that wheelchair users can more easily enter the chapel, adds Father Dominic Mbomson, the prior of the St Thomas Aquinus Priory, as the Dominican convent is officially called. He stresses that for a radical adjustment, like a ramp, they will get in touch with Ashim, who works with his father in the realisation process of his designs. “We respect the work of art we are praying in,” the prior explains.

The new buildings on the site, all of which are behind Nwoko’s creations, were necessary to accommodate the convent’s growth. With its 97 brothers who have taken the vow of chastity, obedience, and poverty, the Dominican Institute in Ibadan is one of the largest priories of this Roman Catholic religious order in the world, says Mbomson. “We are blessed with vocation,” he adds.

The order, which combines a contemplative life with active preaching, welcomes visitors who want to see the chapel and Nwoko’s other buildings, but there are not many of those. Nigerians are not very active tourists in their own country, the prior explains, adding: “But when they come here for a function, they’re always amazed by the architecture.”

In his opinion, it is no coincidence that a creation as extraordinary as Nwoko’s chapel was commissioned by Dominicans. “We are an order of preachers, and you can preach using all things of beauty. Because in all beauty, there is God,” he says.

Not many of the brothers who witnessed the early stages of the building project in the 1960s are around any more, but student brother Gerald Okechukwu has spoken extensively with two of them in the past. They told him that the order had first commissioned another architect, but were not happy with the design he proposed. “They wanted something more African, something that wasn’t Western or foreign,” explains Okechukwu.

After reading fine and applied arts at the University of Nigeria in Nsukka, Okechukwu joined the order in 2010. Nwoko’s design, a structure he had heard nothing about in art school, struck him from the first time he saw it. “This was a sculpture, not a building,” he thought.

The 32-year-old has not yet been ordained as a priest, but he hopes he will not be sent away when that happens. “This is such an inspiring environment. Every corner gives you something to think about,” he says.

One day he was counting the wooden pillars in the chapel, which seem to be growing organically out of the soil. “I discovered there are eight big columns and four smaller ones. Twelve in total; just like the disciples,” he explains.

Even the fact that the chapel remained unfinished has a religious connotation to him: “Unfinished like the church itself. Just like our journey will not be finished here, but only when we meet God.”

“Yes, some of my father’s works remain unfinished,” acknowledges Ashim Nwoko. “My dad was extreme. You can’t deal with someone like that for long.” He points up to the concrete steeple of the chapel. “I think he still wanted to put a mosaic up there. But it doesn’t look incomplete, does it? At whatever point my father left the job, it never looked unfinished.”

The New Culture Studio that his father designed and built on one of Ibadan’s hills, and where Ashim lives and works, is also an ongoing project. The roof of the theatre adjacent to the studio has not been put up yet. But this year Demas Nwoko turns 80 years old, and his family and friends are trying hard to roof the theatre in time for the party they are planning to hold there.

“He hasn’t come to Ibadan since 2009. That’s why we want to celebrate his 80th birthday here,” Ashim says. “My father deserves to be celebrated.”

The post My life in a building: A chapel from the soil appeared first on African Media Agency.