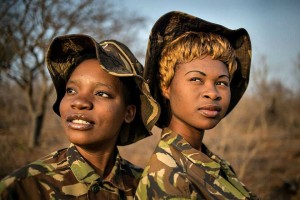 Members of the Black Mamba Anti-Poaching Unit, a South African and majority-women ranger group. Photo: Black Mamba Anti-Poaching Unit[/caption] 8 September 2015 – The Black Mamba Anti-Poaching Unit, a South African ranger group consisting mostly of women, has been named as one of the winners of the top United Nations environmental prize. By bestowing its Champions of the Earth award to the Black Mambas, in the Inspiration and Action category, the UN Environment Programme (UNEP) is recognizing the “rapid and impressive impact” the unit has made in combatting poaching and the courage required to accomplish this task, the agency said in a news release issued yesterday. “Community-led initiatives are crucial to combatting the illegal wildlife trade and the Black Mambas highlight the importance and effectiveness of local knowledge and commitment,”said UNEP Executive Director Achim Steiner. “Their many successes are a result of their impressive courage and determination to make a difference in their community. The Black Mambas are an inspiration not only locally, but across the world to all those working to eliminate the scourge of the illegal wildlife trade.” Since its inception in 2013, the 26-member unit has helped arrest six poachers, reduced snaring by 76 per cent, removed over 1,000 snares and put 5 poachers’ camps and 2 bush meat kitchens out of action. The area that they protect, the Balule Private Game Reserve, is home to an abundance of wildlife – including not only rhino but leopards, lions, elephants, cheetahs and hippos. It is part of the Greater Kruger National Park, a network of over 2 million hectares of protected areas that is home to thousands of birds, impalas, giraffes, wildebeest, buffalos, antelopes, hyenas, crocodiles, fish and zebras. Protecting the rhino is vital in South Africa, where 1,215 rhinos were killed in 2014 alone. This is an increase of over 12,000 per cent since 2004 and symptomatic of a devastating epidemic that has pushed the rhino closer to the edge of extinction, according to UNEP. Mr. Steiner noted that while their work contributes mostly toward ecosystem preservation and halting biodiversity loss, Goal 15 of the Sustainable Development Goals, it also exemplifies the action-driven solutions needed to achieve all of the SDGs, which world leaders will adopt later this month. “With every rhino saved, the Black Mambas demonstrate that action on a local level is critical to achieving global sustainability and equity,” he stated. Leitah Mkhabela, a member of the Black Mamba rangers, said: “I am not afraid, I know what I am doing and I know why I am doing it. If you see the poachers you tell them not to try, tell them we are here and it is they who are in danger. “Animals deserve to live; they have a right to live. Do your part. When demand ends, the killing will end. Say yes to life. Say no to illegal rhino horn and elephant ivory.” To date, the Champions of the Earth Awards have recognized 67 laureates in the categories of policy, science, business and civil society. This year, the award year aims to support the Sustainable Development Goals by illustrating, through the examples of the laureates, that the transition to low-carbon, resource-efficient, inclusive and sustainable economic models is not just possible, but already in progress. The other winners for this year will be announced in the coming weeks and will receive their honours at a ceremony to be held at the close of the Sustainable Development Summit on 27 September in New York. *UN]]>