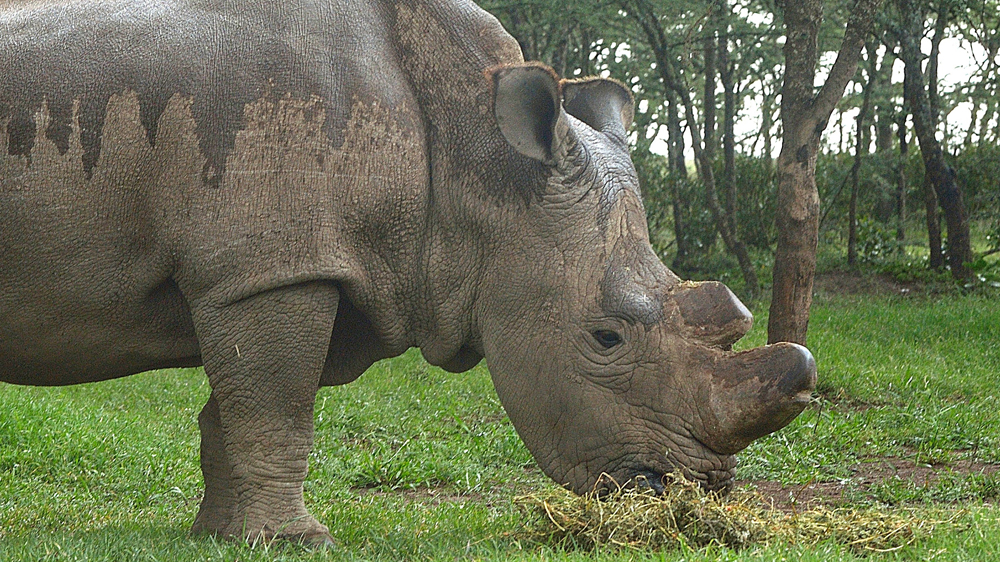 Laikipia, Kenya – As the sun rises over Ol Pejeta wildlife conservancy, spreading the purple bruise of Mount Kenya’s pointed shadow across the sky, Sudan the rhinoceros leaves his pen and starts marking the territory he hopes to lure a mate into.

In March, Sudan became the last male northern rhino in the world – and the last hope for saving his subspecies by impregnating his daughter or granddaughter.

On World Rhino Day on Tuesday, Sudan and three females in the 243-hectare natural habitat in Kenya are the only remaining northern whites after they were brought from a Czech zoo, where the cold concrete and diet of bread and apples withered their chances of breeding.

Although his keepers say Sudan “still admires the ladies” and is willing to mate, his flesh and sperm are too weak to produce offspring.

While the average wild rhino lives up to 35 years, Sudan, 42, is alive but doesn’t stand a fighting chance of winning over the females because of his arthritis and blindness in one eye.

“For rhinos to mate, they need to fight. If the male wins, [they’ll be] mating. If the female wins, no mating. It’s a way of approaching one another – like humans talking in bars,” says Zacharia Mutai, one of Sudan’s five keepers.

Mutai says he often feels for “the old man” when he emerges from vigorous wooing attempts with a bloody and bloated face, or whose slumped back legs prevent him mounting and lasting the duration of a 45-minute to one-hour-long mating session.

“That’s why Chinese people believe that if they have a rhino horn, they will do it like a rhino,” says Mutai of a common

The penchant for rhino horn dates back to 200 BC in traditional Asian medicines. In the 1990s, the demand for daggers made of rhino horn surged in the Middle East, especially Yemen.

But in recent years, criminal syndicates, primarily in Vietnam and China, have reignited and reinvented such a market for rhino horn as a trophy and tonic. It has let powder-pushers into cancer wards to sell $200 “cures”, and left rhinos throughout Asia and Africa staring down the barrel of a gun.

“This is the year when poaching deaths and natural mortality overtake births,” said Cathy Dean, director of Save the Rhino.

Rademeyer says some South African private reserve owners are selling off rhinos as security costs increase exponentially with skyrocketing horn prices that are currently up to $65,000 for each kilogramme.

East Africa has been less affected by rhino poaching, but Ol Pejeta spends one-quarter of its budget on security, including binocular-toting patrol squads by day and Kenyan police who can fire their weapons by night.

Meanwhile, keepers spend three days tickling Sudan’s belly as they file down his horn to make him less attractive to poachers. It’s a labour of love for Mutai, who only read about rhinos in books before coming to work here.

“I heard about the prehistoric dinosaurs. When I came to see a rhino, it looked like that.”

He wants them to survive “for our children and grandchildren. I want them to see what I’ve seen”, not just in books, he says.

If the status quo continues, however, all rhinos could disappear by 2026.

“If you have a baby this year, by the time you’re choosing secondary schools, rhinos could be extinct,” says Dean.

Also contributing to the threat of extinction are ongoing human activities. Last year, the World Wildlife Fund said consumers from developed countries have contributed to the decimation of the wildlife in developing countries over the past 40 years.

“I’m afraid it’s just overexploitation of the planet’s resources by humans. That’s all it is,” says Ol Pejeta’s CEO Richard Vigne, as Sudan munches the protein-rich alfalfa meant to slow his extinction.

Rhino-saving solutions are everywhere, but conflicting. A biotech startup company, Pembient, is taking rhinos back to the future with a 3-D printed keratin horn that is genetically engineered to be “as pure as that of a rhino of 2,000 years ago”.

The plan to flood the market with a product that costs $7,000 per kilo, “around an eighth of the price of the original”, aims to put poachers out of business.

But experimenting with a market that few understand could actually push the demand for genuine horns and drive the prices higher.

In South Africa, wildlife rangers and veterinarians have taken to sedating rhinos and removing the horn properly to prevent the brutal poaching method of hacking a rhino’s face off to get it.

Proposals to farm horn could also boost the little-understood market.

“While it would be possible to preserve rhinos in a kind of farm situation – in crates or in paddocks or like cattle – that would probably be the end of populations of wild rhino,” Vigne says. “Right now, we’re trying to keep them alive with the price that currently prevails; if it went up, it would be impossible.”

According to 2013 consumer research in Vietnam, the main market is being driven by affluent 35 to 50-year-old businessmen living in big cities and seeking “emotional value”.

“Having a rhino horn is like having a Ferrari. There’s no need for one, but you think it makes you look good,” says Vigne. Consuming the horn, he says, “is as useful as chewing your fingernails”.

In 1975, three-year-old Sudan was plucked from his namesake, where he was one of about 1,000 northern whites roaming around Central Africa before poachers bartered the rest for weapons during decades of civil war that swept through the region.

In 2005, wrangling local officials scuppered plans to extract five survivors from Garamba in eastern Congo for breeding purposes. A year later, northern whites were declared extinct in the wild.

“The moral of the story is that, unfortunately, politics and misplaced national pride got in the way of saving the northern white rhino,” says Dean.

Indonesia’s Javan rhinos and the Himalayan rhinos could be saved through secondary populations, but the northern white is “a doomed subspecies”, as it has fallen below the critical mass of 20 to be bred back up, she says.

The southern white rhino “went through a sort of genetic bottleneck”, going from 20 animals at the turn of the century to about 14,000 now without repercussions, says Dean.

But they weren’t as aged, unproductive, and closely related as the remaining northern whites – which include two females beyond reproductive age and 14-year-old Fatu, who has a damaged uterus and would be unlikely to carry a calf to the full 18-month term.

Vigne, however, is not giving up. Ol Pejeta is trying to raise $800,000 to pioneer in vitro fertilisation of a surrogate southern white rhino using frozen sperm and eggs taken from its northern relatives.

So while Sudan can die without the weight of the northern whites on his shoulders, the females, who are “simply repositories of eggs” in Vigne’s eyes, have to stay alive long enough for scientists to master how to extract and store delicate rhino eggs.

For one of the world’s oldest species, “it’s a race against time”.

The post Kenya: Race against time to save the last white rhinos appeared first on African Media Agency.