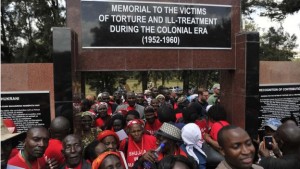 A UK-funded memorial to Kenyans killed and tortured by British forces during the Mau Mau uprising in the 1950s has been unveiled in the Kenyan capital.

The monument is part of a 2013 out-of-court settlement by the UK government when it agreed to pay £20m ($30m) in compensation to Mau Mau veterans. It also expressed “sincere regret” for abuses committed under colonial rule. Thousands of veterans crowded into the memorial site in Nairobi to witness the historic unveiling. The statue shows a woman handing food to a Mau Mau fighter, their faces turned away so they could not reveal the other’s identity if caught by the British authorities. Tens of thousands of Kenyans were held in detention camps during the Mau Mau campaign. Many suffered abuses including beatings, rape and castration. “The memorial stands as a symbol of reconciliation between the British government, the Mau Mau, and all those who suffered during the emergency period,” Christian Turner, the UK High Commissioner to Kenya, said at the ceremony. Many of the veterans and their families who crowded into Nairobi’s Uhuru Park were clad in red T-shirts printed with the words “shujaa wa Mau Mau”, meaning “heroes of Mau Mau”, the underground movement that fought against British colonial rule. The midday sun did not deter their enthusiasm as they sang old war songs to remember their struggle for independence. [caption id="attachment_20632" align="alignright" width="300"] 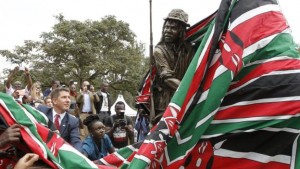 The Mau Mau memorial project cost £90,000 ($138,000), the AFP news agency reports[/caption] At the centre of the monument is a sculpture depicting an armed dreadlocked fighter receiving food from a woman in a traditional “kiondoo” basket. The sculptor, Kevin Oduor, told the BBC that it acknowledged the role both men and women played to liberate Kenya. “The veterans re-enacted this scene before I came up with the sculpture,” he said. Excited veterans and their families crowded around the monument as soon as it was unveiled to take pictures. There was a look of satisfaction on their faces. For many, it is a symbol of closure. Daniel Leader, from the London-based Leigh Day law firm that represented the 5,228 victims Mau Mau veterans who sued for compensation, said the memorial was “historic” and represented “the first apology by the UK government for abuses”, the AFP news agency reports. The Mau Mau began a violent campaign against white settlers in 1952, but the uprising was eventually put down by the British colonial government. The Kenya Human Rights Commission says 90,000 Kenyans were executed, tortured or maimed, and 160,000 people were detained in appalling conditions. A number of historians believe the figure is lower. *Source BBC]]>